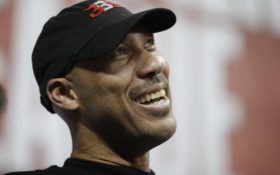 Outspoken basketball dad LaVar Ball questioned the extent of President Donald Trump’s involvement in securing his son’s release from the custody of Chinese authorities during a combative 20-minute CNN interview on Monday night.

The president, in tweets Sunday, said he should have left LiAngelo Ball and two other UCLA basketball players accused of shoplifting in jail because LaVar Ball “is unaccepting of what I did for his son” and “very ungrateful!” LaVar Ball has refused to thank Trump.

LaVar Ball didn’t back down during the CNN interview, telling host Chris Cuomo that Trump has more important things to do than ask for his gratitude.

“That’s on your mind, that a father didn’t say ‘Thank you’? And you’re the head of the U.S.? Come on,” Ball said. “There’s a lot of other things that’s going on. Let him do his political affairs and let me handle my son, and let’s just stay in our lane.”

Ball suggested that he and Chinese president Xi Jinping had more to do with securing his son’s release than the president.

“Did (Trump) help the boys get out? I don’t know. If I was going to thank somebody, I probably would thank President Xi. He’s in China. He’s the president of China,” Ball said, later adding: “I helped my son get out of China. I had some people that had boots on the ground that knew the situation.”

Ball also pushed back against Trump’s suggestion that shoplifting “is a very big deal in China.”

“It wasn’t a big deal because being raised in South Central LA, I’ve seen harsher things. I’ve seen 16, 17-year-old kids that have had to go to jail for life, that were my friends,” Ball said. “He wasn’t physical. He returned it. He fessed up to it.”

LiAngelo and fellow UCLA freshmen Jalen Hill and Cody Riley have been suspended indefinitely. They were arrested and questioned about stealing from high-end stores next to the team’s hotel in Hangzhou, where the Bruins stayed before leaving for Shanghai to play Georgia Tech. All three apologized for their actions and thanked Trump for his role in securing their release, which occurred while the president was traveling in Asia.

The trio isn’t allowed to suit up, be on the bench for home games or travel with the team. Without them, No. 23 UCLA lost to Creighton on Monday night in the Hall of Fame Classic.

LaVar Ball is attempting to build an empire around the basketball skills of his three sons — Los Angeles Lakers rookie Lonzo, LiAngelo and prep prospect LaMelo — and his own bombastic personality. He started an apparel company, Big Baller Brand, with shoes that retail for $500 or more, and he got in several plugs for his products during the CNN interview.