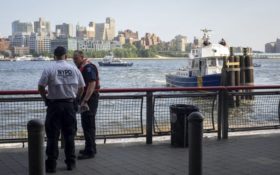 A man who fled to Thailand after allegedly tossing his dead 7-month-old son into a river has been returned to New York and arrested.

James Currie, 37, was escorted off a plane at Kennedy Airport late Thursday and turned over to police and border agents. He faces a likely arraignment Friday on charges of concealing a human corpse.

The Bronx father is accused of throwing the lifeless body of his son, Mason Saldana, into the East River near the Brooklyn Bridge last Sunday. A tourist spotted the child’s diaper-clad body and waded into the water to retrieve it.

As of late Thursday, investigators were still trying to determine how the child died. Additional charges against Currie could be filed pending an autopsy.

New York City police say the Currie, who lives separately from the child’s mother, took the baby to his Bronx apartment around 12:30 p.m. Saturday, under a custody arrangement. Investigators have determined that the child was dead before he was put in the river.

Police detectives have obtained security camera videos showing Currie walking toward the river Sunday carrying a backpack. The bag was later found floating in the river near the child’s body.

Currie flew to Bangkok on Monday afternoon. An immigration police spokesman in Thailand, Col. Cherngron Rimpadee, told The Associated Press that by the time Currie touched down, authorities there had been informed that police in the U.S. were looking for him.

“American officials informed us that he is a wanted person in the United States so we rejected his entry into the country,” he said. Immigration officials denied him admission to Thailand.

The baby’s mother told police in New York that she became worried Monday when Currie failed to drop off their child at day care Monday. She called 911, police said, telling the dispatcher that she had seen news reports about a baby found in the river and feared that it was her son.