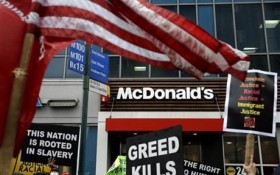 Fast food workers from McDonald’s, Taco Bell and other chain restaurants took to the streets in over 270 cities around the country Tuesday, demanding companies pay them at least $15 an hour.

The protesters also had a message for presidential candidates: Support the cause, or else.

The fast food protests were planned by organizers from the Service Employees International Union in cities nationwide, part of an ongoing campaign called “Fight for $15.” Other pro-union workers joined some protests, organizers said.

The campaign began about three years ago and is organized and funded by SEIU, which represents low-wage workers.

This time workers are pledging not to vote for presidential candidates who do not support the campaign. Democratic candidates Hillary Clinton and Bernie Sanders both raced to show their support through tweets on Tuesday, and Sanders showed up at a protest outside the Senate in Washington.

McDonald’s worker Adriana Alvarez said she plans to vote for the first time next year, but only for a candidate who wants to raise wages to $15 an hour

Economists have long debated the impact of raising the minimum wage, with most free market economists arguing that minimum wage growth would hurt the job creation.

A jump to $15 an hour would be more than double the federal minimum of $7.25 — a much higher increase than what economists have studied. It would also be far above the minimum wage’s previous peak of just under $11, adjusted for inflation, in 1968.

McDonald’s Corp., based in Oak Brook, Illinois, said in a statement Tuesday that wages at U.S. restaurants it owns increased $1 over the local minimum wage in July, affecting about 90,000 employees.

Rival Burger King, which is owned by Canada-based Restaurant Brands International Inc., said its franchisees that own the restaurants make wage decisions, not the corporate company.

Yum Brands Inc., the Louisville, Kentucky-based company behind Taco Bell and KFC, said its employees are paid above minimum wage at its 2,000 company-owned stores.

Some at the rally were not fast food workers. Liz Henry, 38, who works in environmental services at a New York hospital, makes more than $15 per hour but supports the effort for other workers.

“Even what I’m making right now is not even enough,” she says.