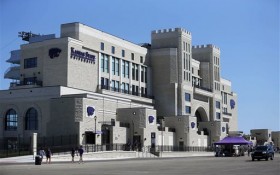 A mason working on a Kansas university building has found an 88-year-old handwritten note that gives a glimpse into the lives of laborers in 1928.

The Manhattan Mercury reports that the mason found the note in a tobacco can he encountered in December while restoring and replacing stones at Kansas State University’s East Memorial Stadium in Manhattan, nearly 60 miles west of Topeka.

A Facebook post from the Kansas State Historical Preservation Office says the five authors dated the note Feb. 2, 1928, and wrote that they hope the letter is found someday in the future, perhaps after they’ve died. The letter is signed with the names C.K. Bell, Geo H. Bell, W. Sowell, Jim Kelley and Ray Disney.

The nearly 100-word message explains that masons made $10 per day and that laborers made $3.20 per day. It also expresses hope that “things will be better” for the working man in the future.

University archivist Cliff Hight says the document will be sent to a conservator for cleaning and protective covering. Hight says there aren’t plans to display the document currently, but that it could potentially be displayed in the stadium’s Welcome Center when the project is completed.

“(There’s) a possibility it will be either exhibited as the original item or it will be digitized and we can put a copy out so the light doesn’t cause the letters to fade worse,” Hight said.

Kansas State project manager Jeremy Sharp says that the stadium was built in 1922, and the eastern wall was constructed in 1928.