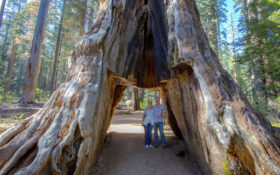 Joyce Brown was 12 when her parents first took her to visit the “drive-thru tree,” a giant sequoia in California famous for a car-sized hole carved into the base of its trunk.

Brown thought she had entered a land of giants as she walked underneath and around the ancient 100-foot-tall tree, which was toppled by a massive storm on Sunday.

“It’s kind of like someone in the family has died,” said Brown, a 65-year-old retired middle school teacher in the San Francisco Bay Area who spends about a third of the year at her family’s cabin in Arnold, about 4 miles from where the now-fallen tree lies dead in Calaveras Big Trees State Park.

Four generations of Brown’s family have spent countless hours at the tree and often took out-of-town visitors there, some from as far away as Turkey.

In May 2015, she and her husband showed off the tree to John and Lesley Ripper, a Michigan couple the Browns befriended on an African safari.

“I was blown away,” said John Ripper, a 55-year-old printer in Northville, Michigan. “I’ve traveled to 70 countries. But that particular tree and being able to walk underneath it and touch it was quite a memorable moment and something I won’t soon forget.”

Ripper said he can’t believe that a storm felled such a massive, sturdy-looking tree.

“In the blink of an eye, it’s gone,” he said. “There’s this giant tree everyone remembers, and it’s going to be laying there in plain sight. The dead giant.” 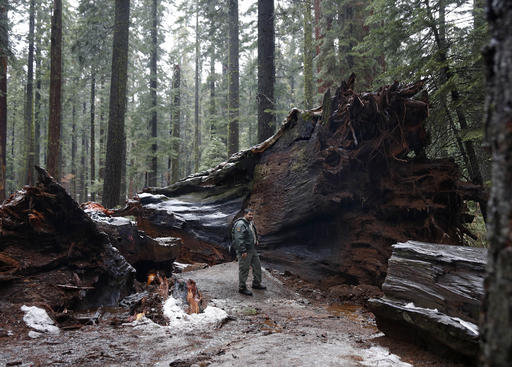 Sumner Crawford of Charleston, South Carolina, remembers every detail of his first visit to the tree as a kid in the early 1990s.

“I remember I was walking through the tree and thinking, ‘I’m inside of the tree right now!'” he said. “It was madness.”

Crawford, 36, was stunned by the sequoia’s size: When his family of four tried to join hands around the tree they discovered they couldn’t even come close.

“It was so different and so odd,” Crawford said, adding that he recently visited the tree again and relived those memories.

“I feel like it’s part of my personal history. So it’s a bummer to see it go,” he said.

The tunnel that made the tree famous and ultimately weakened it was carved into its trunk in the 1880s to allow tourists to pass through, first with horses and buggies and later with cars. The tunnel was limited to pedestrians in recent decades.

The largest tree species in the world, sequoias can reach diameters up to 27 feet and have shallow root systems that make them vulnerable to toppling.

The drive-thru tree had a diameter of 22 feet and was about 2,000 years old, said Tony Tealdi, a supervising ranger at California State Parks.

When the already mostly dead tree hit the ground on Sunday, it shattered and is now completely unrecognizable, said Jim Allday, a volunteer at Calaveras Big Trees State Park.

“It was majestic,” he said. “Now it’s basically a pile of rubble.”