This famous author’s chair sold for… HOW MUCH!? - The Horn News 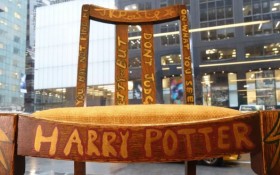 A 1930s-era oak chair that J.K. Rowling used while writing the first two books of the Harry Potter series has sold for $394,000.

The chair was auctioned twice before — once by Rowling to benefit charity.

Before she donated the chair, she painted on it: “You may not/find me pretty/but don’t judge/on what you see.”

The seller is donating 10 percent of the purchase from the anonymous private buyer to Rowling’s children’s charity.