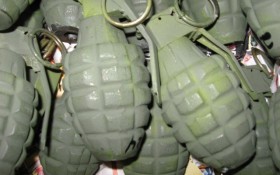 A political supporter who mailed a gag grenade to a newly elected county sheriff in Pennsylvania won’t be charged with a crime.

Beaver County District Attorney David Lozier said Thursday that the man meant no harm. He says the grenade was a disarmed World War II device and wasn’t intended to alarm anyone.

Rather, the man who mailed it was a supporter of Sheriff Tony Guy. The grenade was mounted on a plaque with a sign reading, “Complaint department. Take a number.” A numbered plastic ticket was attached to the grenade’s pin.

Guy didn’t know the man who sent the package, so the courthouse was evacuated for about 90 minutes Wednesday after the package was X-rayed with other incoming mail.

The sender ordered the gag grenade through the mail.