Face of the party: The liberal leaders caught wearing blackface in 2019 - The Horn News 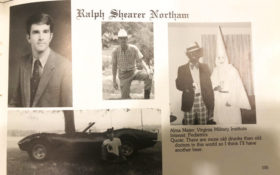 Democrats entered 2019 with some “fresh faces” in leadership.

But 2019 was also a year of blackface for Democrats.

The so-called champions of social justice saw numerous leaders, both old and new, (even one in the media!) dressed in the racially offensive costumes.

In February, Virginia Gov. Ralph Northam refused to step down after yearbook photos from 1984 were found, in which he donned either a blackface costume or a KKK uniform.

You can view the yearbook photo below, courtesy of a Twitter user:

Ralph Northam admits blackface Michael Jackson. Denies it was him in yrbook racist pic – then who is it and why did he pick racist pic?
He proudly picked photos with him in each one. Logic he was PROUD of racist blackface klansman photo#RalphNorthram #ResignRalph #NorthamResign pic.twitter.com/TOt8SJ0o5l

And to make matters worse, he flip-flopped in a mere couple of days, first admitting that it was him in the photos, then denying it was him the very next day!

“It is no longer possible for Governor Northam to lead our Commonwealth and it is time for him to step down,” he said in early February.

Then, Herring himself admitted to ALSO having worn blackface in 1980!

“In 1980, when I was a 19-year-old undergraduate in college, some friends suggested we attend a party dressed like rappers we listened to at the time, like Kurtis Blow, and perform a song,” he said in a statement.

After that admission, Richmond, the capital of Virginia, was a house on fire — especially after the Lieutenant Gov. Justin Fairfax, the third Democrat in line for the governorship, was accused of sexually assaulting a woman at a Democratic National Convention in Boston in 2004.

Facing a Republican governor in Virginia, Democrats rallied around Northam, Herring, and Fairfax.

But the liberals weren’t done with blackface controversies.

And the next scandal was straight out of a TV script… literally.

“The View” co-host Joy Behar was exposed in a picture where she was dressed as a “beautiful African woman” for Halloween.

“That is me. I was 29. It was a Halloween party, I went as a beautiful African woman. That’s my hair,” Behar said. “I had makeup that was a little bit darker than my skin, but that’s my actual hair, though.”

Outraged? Her liberal co-hosts were squealing and laughing along!

And co-host Raven Symone, who is African American herself, said she loved it…

Wow… @JoyVBehar dressed in blackface and even bragged about it on national TV.
I'll ASK one more time.. WHERE'S THE OUTRAGE ??!?
Where are the calls for a boycott, protests , where are the grab your wallet people … ???!?!? @megynkelly was fire for less. #DoubleStandards pic.twitter.com/bL9xfc094B

But on three separate occasions!

TIME obtained evidence of Trudeau wearing blackface while he was an instructor at West Point Grey Academy, at an “Arabian Nights” themed party.

And after Trudeau was caught, he confessed to a second instance in which he wore blackface while competing in a talent show, singing the Jamaican folk song “Day O.”

A third photo of him in blackface was released by journalist Mercedes Stephenson of Global News just days later.

You can view all 3 highly offensive costumes below: