EXPOSED: The criminals working for Hillary - The Horn News 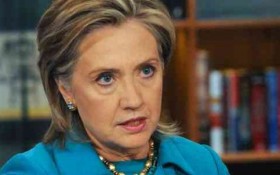 Two felons in one week? Just days after making a personal appearance at a convicted drug dealer’s home to plead for campaign money, former Secretary of State Hillary Clinton’s campaign has again been rocked by scandal and at least one of her workers is being accessed of committing a Class E felony.

Wednesday, a campaign worker for  Clinton was  busted by undercover watchdogs committing election fraud, according to reports by multiple media sources. The charge – a Hispanic outreach voter registration canvasser Henry Engelstein, was caught on camera using an anti-Trump, pro-Hillary campaign message to lure Nevada Hispanics in to register to vote.

According to the investigative filmmaker James O’Keefe, his group caught Engelstein telling voters in Spanish that Donald Trump was “a giant clown” and that Clinton is “very good.”

In Nevada, election law makes it a Class E felony to advocate for or against a political candidate when involved in the voter-registration process.

The penalties for these violations range from one to four years in jail. Clinton’s campaign is organizing a major push to grab Latino voters ahead of the Nevada caucuses and early primary contests in Texas, Florida and Colorado, all with an eye toward connecting with Hispanics in the 2016 election.

And the incident follows fast of the heels of Clinton’s recent felon-hosted fundraiser.

Just days ago, the Clinton campaign came under heavy media scrutiny after she made a personal appearance at a convicted drug dealer’s home for a fundraiser. The drug dealer, previously convicted of a felony for selling cocaine to an undercover police officer, is son of the 1984 Democratic Vice-Presidential candidate, Geraldine A. Ferraro, John Zaccaro, Jr.

Clinton’s campaign, in an announcement Wednesday, said she had taken in $28 million in political donations over the last quarter. Most of it came from fundraisers hosted by big donors across the country. Many took place in the traditionally Democratic treasure-chests of Manhattan and Hollywood. She raised at least $19 million from about 60 events where admission typically cost $2,700, the biggest donation allowed by law.