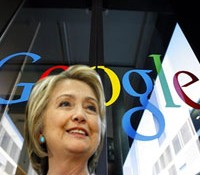 One of the most powerful companies in the world is being accused of taking liberal political correctness to an alarming, dangerous, and possibly illegal new level.

Google, the search-engine giant with its fingers in everything from commerce to transportation, is the target of a new lawsuit claiming the company is hostile to conservative white men.

The suit was filed by James Damore, who achieved viral fame – or perhaps infamy – over the summer when he was outed as the author of a memo slamming the company’s diversity efforts.

He was eventually fired over the memo, but in the lawsuit filed in Santa Clara Superior Court in Northern California claims he was first targeted for harassment at work.

He’s joined in his lawsuit by David Gudeman, a former Google engineer who says he also suffered discrimination for not kowtowing to PC culture.

“Damore, Gudeman, and other class members were ostracized, belittled, and punished for their heterodox political views, and for the added sin of their birth circumstances of being Caucasians and/or males,” the lawsuit claims. “This is the essence of discrimination.”

The court filing accuses the company of going “to extreme — and illegal — lengths to encourage hiring managers to take protected categories such as race and/or gender into consideration as determinative hiring factors, to the detriment of Caucasian and male employees and potential employees.”

In fact, while the company claims to pride itself on diversity, the lawsuit says that workers there took pride in making it hostile for white conservatives.

Here are some of the more outrageous claims in the court filing:

It’s apparently not getting much better.

Damore told Fox News that Google still engages in “harassment and career sabotage of anyone that expresses a conservative viewpoint, and there’s constant shaming and attacks against white men within Silicon Valley.”

So he’s suing, but his attorney says it’s not about collecting a settlement from the company’s deep coffers.

“This is not about money,” Harmeet Dhillon, the Republican National Committee’s committeewoman for California who is representing the pair, told USA Today. “This is about changing the behavior and the attitudes in Silicon Valley.”

Given its location in the heart of the leftist San Francisco Bay Area, good luck with that.