EXPOSED! Soros just paid millions to take control of... WHAT!? - The Horn News 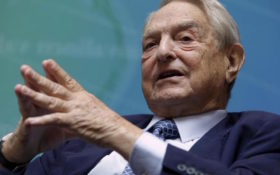 You might think the 2018 midterms aren’t worth bothering with, but you know who is jumping at the bit to get involved? Billionaire George Soros.

Soros and his minions are behind a push to crush President Donald Trump supporters and elect 400 Senator Bernie Sanders-style socialists to Congress.

Exley and a group of former campaign employees founded a PAC called Brand New Congress to make their dreams a reality.

“Brand New Congress is a campaign to run 400+ non-politician candidates for Congress in 2018 in one unified campaign behind one plan to rebuild the economy, repair our communities and radically reform our institutions,” the group says.

He founded his group in Missouri so he can pretend that he represents America’s heartland – but it’s actually a raving left-wing PAC with ties to the move powerful billionaire in global politics.

Exley worked at MoveOn.org in 2004, when Soros first started pouring money into it. His millions made MoveOn.org the most important political group on the Left… and gave him control over the Democratic Party.

Exley let the cat out of the bag just after the 2004 elections in an e-mail to supporters, saying the Democratic Party is now “our party.”

The head of DNC – the group that Soros bought – immediately called her “the future of the Democratic Party.”

On the day after her victory, she thanked the secret powers behind her meteoric rise to power.

Justice Democrats is a group affiliated with Brand New Congress – and Exley helps lead them both.

One of the co-founders of Justice Democrats is Cenk Uygur, the host of “The Young Turks” show – the one Ocasio-Cortez was talking to.

She personally thanked Cenk (whose first name is pronounced “Chenk”) – who has another Soros connection: His show is part of a Soros-funded propaganda network called The Medium Consortium.

The group admits that it only exists to create an “echo chamber” that “pushes the larger public or the mainstream media to acknowledge, respond, and give airtime to progressive ideas because it is repeated many times.”

The same Media Consortium funds the group that did a documentary about the women accusing Trump of sexual harassment, Brave New Films.

But it works. The Media Research Center says the network – think of it as the Soros Broadcasting System – reaches more than 300 million people every month.

When the members of that network heard about the young, attractive Latina running for Congress in Brooklyn, they flooded the zone – and look how effective it has been.

Ocasio-Cortez has practically been made a saint!

She told “The Young Turks” that glowing coverage of her campaign in the left-wing blogosphere helped her win “in no small part.”

That’s what happens when all of Soros’ campaign apparatus comes together to push the right candidate.

Soros hopes he can do it 399 more times between now and November.

As the 2018 midterm elections get closer, Soros has ramped up his lobbying “donations” in a major way.

His D.C.-based Open Society Policy Center spent $10.37 million between April 1 and June 30. That’s four-times as much money as he spent during the first part of this year.

Soros didn’t get to be a billionaire by wasting his money.

He’s preparing for something.

He thinks the Vermont senator, whom the president likes to call Crazy Bernie, has enough fans to let him control the House of Representatives.

He thinks enough “Bernie Bros” will vote for his candidates that Soros can own one branch of government.

If he packs Congress with socialists, the first thing they will do is impeach Trump and pass a crazy socialist healthcare scheme that will cost America $32.6 trillion dollars.

Soros obviously has his sights set on controlling Congress.

Maybe he even has his eyes on your congressional race.

Soros isn’t sitting out the 2018 midterm elections. Make sure you don’t, either.