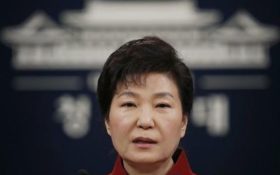 It’s the kind of story that is too unbelievable to trust. And if you’re skeptical, we understand — we wouldn’t have believed it either, unless it came straight from the mouth of South Korean President Park Guen-hye.

But it did, and for the people of South Korea this over-the-top conspiracy plot is very real. A secret, shadowy cult figure named Choi Soon-sil has secretly controlled the South Korean president for years, manipulating public policy behind the scenes for her own personal gain, reports say. The Choi family spent years grooming Park — and it has all been exposed in a shocking undercover investigation into the inner workings of one of the United States’ closest ally.

The scandal exploded last week when, after weeks of speculation, Park publicly acknowledged that Choi had edited some of her speeches and provided public relations help. Widespread media reports say that Choi, who has no official ties to the administration, may have been pulling government strings from the shadows and amass an illicit fortune.

Now Choi has returned home, and is confessed to the media that she “deserves death.”

“Please, forgive me,” Choi said through tears inside the Seoul prosecutor’s building, according to Yonhap news agency. Using a common expression of deep repentance, she added, “I committed a sin that deserves death.”

Choi, wearing a hat and a scarf, her hand pressed to her mouth, was nearly knocked off her feet several times as she tried to walk through a massive crowd of 300 journalists, as well as protesters and security, surrounding the building’s entrance. YTN TV station said that Choi, 60, lost her shoe as the throng converged on her, and a protester reportedly tried to enter the building with a bucket full of animal feces.

Many South Koreans believe there is much more to the story than Park has acknowledged, and the frenzy surrounding the scandal threatens her presidency.

Choi returned home Sunday from seclusion in Germany. It was unclear whether there would be any details revealed from her questioning, or how long she would be in the prosecutor’s office. The questioning of Choi’s former associates, including a purported former employee of a host bar, lasted two days.

Choi and Park reportedly became friends in the 1970s, when Choi’s late father, Choi Tae-min, a shadowy religious figure who was a Buddhist monk, cult leader and Christian pastor at different points of his life, emerged as Park’s mentor.

At the time, Park was serving as acting first lady after her mother was killed in 1974 by a man trying to assassinate her father, military strongman Park Chung-hee, who would be murdered by his own spy chief five years later.

Choi’s father gained Park’s trust by reportedly convincing her that he could communicate with her assassinated mother. Choi’s father denied this in a 1990 media interview.

The senior government official who later shot and killed Park’s dictator father, President Park Chung-hee, is said to have claimed that he staged his attack in part because Park Chung-hee wouldn’t keep Choi’s father away from the young Park Geun-hye.

Elected in 2012, Park has long been criticized for an aloof manner and for relying on only a few longtime confidantes. Most South Koreans, however, assumed those confidantes were in the government. That she may have been outsourcing decisions to someone outside of government, and someone connected with a murky, lurid backstory, has incensed many.

Tens of thousands took to the streets in protest over the weekend, and Park’s political opponents are calling for her immediate resignation.

Media reports said the younger Choi used her connections to Park to pressure businesses to give money to two nonprofit organizations Choi controlled; Choi then allegedly used some of the organizations’ official funds for personal purposes. South Korean media speculated that the two foundations collected about $70 million in donations from business groups in just a few months.

The president of Ewha Womans University has resigned amid protests over allegations that Choi used her connections to Park to get her daughter into the elite school and then secure special academic treatment.

Political and business corruption remains widespread in South Korea, which has had full democracy only since the late 1980s, when it shook off decades of military dictatorship. But the current scandal has struck a chord in a way that previous ones have not.

Part of it has to do with Park Geun-hye and her past, which is deeply entwined with South Korea’s recent, tumultuous history. The legacy of her father is still divisive. Supporters see him as saving South Korea from poverty and irrelevance by building up the economy from the rubble of the Korean War. Opponents say that the economic development came at the expense of massive human rights abuse, including the torture and death of dissidents.