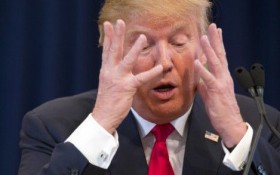 A major newspaper may be in possession of an audio recording of Donald Trump that reveals he’s secretly softer on immigration than he’s publicly claimed — and his political opponents are using the rumor to appeal to voters ahead of Super Tuesday’s contest.

But is this a secret that will really threaten the Trump campaign, or just desperate attacks against The Donald aimed to hurt him at the voting booth?

According to Buzzfeed News, the reported tape has reached “near-mythical status” around the offices of the New York Times, and that it’s release would deal a “serious blow” to the Trump campaign. Texas Sen. Ted Cruz — desperate to catch up in the polls heading into the all-important Super Tuesday — has jumped on the rumor and demanded the tape’s immediate release Tuesday.

The reported audio is allegedly from an off-the-record conversation between Trump and the editorial team of the notoriously liberal Times, who recorded the exchange on Jan. 5th in a lead-up to an interview with the billionaire.

According to rumors, Trump allegedly states his hard stance on immigration is merely a starting point in negotiations, and that he doesn’t really intend to deport 11 million illegal immigrants and build a wall.

At least one Times editor used her experience in the meeting to take a swipe at Trump.

Gail Collins said in her Feb. 26th column that, “The most optimistic analysis of Trump as a presidential candidate is that he just doesn’t believe in positions, except the ones you adopt for strategic purposes when you’re making a deal. So you obviously can’t explain how you’re going to deport 11 million undocumented immigrants, because it’s going to be the first bid in some future monster negotiation session.”

However, some critics are saying that Trump didn’t mention anything new — and that the revelation may be little more than a last minute political attack from Trump opponents.

Sounds like SECRET TAPE might have Trump saying what he said on the record to Byron York. https://t.co/9ifp7rJH4x pic.twitter.com/GamjEqjRWC

The New York Times has publicly stated they would release the recording, should Trump gives his blessing. Their response has left some political analysts to speculate there’s more smoke than fire on the tape, while others are suggesting the newspaper is saving the recording for a more opportune moment; the general election.