Exposed! Secret program spying on your calls - The Horn News 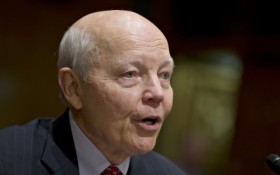 Internal Revenue Service Commissioner John Koskinen made a shocking admission earlier this week when called to testify before the House: For years, the IRS has been developing and using top secret, suitcase-sized devises to monitor American citizens.

Now, two top senators – Chuck Grassley, R-IA and Patrick Leahy are, D-VT – are demanding answers. Who could the IRS be spying on, and why?

Civil libertarians and privacy advocates have long expressed concern about these suitcase-size devices, known as Stingrays, which mimic cell-towers to scoop up electronic data that can be used to locate nearby phones and identify their owners.

Federal law enforcement officers are required to get a warrant signed by a judge before using Stingrays, except under emergency “exigent circumstances” meeting the constitutional standard for probable cause under the Fourth Amendment, but when there is no time to get a warrant.

Current policy lets some government agencies use Stingrays in “exceptional circumstances” without meeting the legal threshold for probable cause.

“We were surprised to learn that IRS investigators may be using these devices,” Grassley and Leahy said in a letter. “Cell-site simulators mimic cell towers, forcing cell phones in the area to convey their approximate location and registration information.”

The letter continues “While the devices can be useful tools for identifying the location of a suspect’s cell phone or identifying an unknown cell phone, we have previously expressed concerns about the privacy implications of these devices… The devices indiscriminately gather information about the cell phones of innocent people who are simply in the vicinity of the device.”

Privacy groups and some lawmakers have raised alarms about the secrecy surrounding the use and the collection of cellphone information of innocent bystanders who happen to be in a particular neighborhood or location.