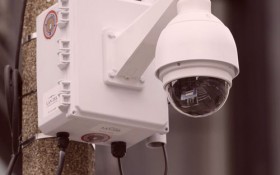 Big Brother is watching you.

It sounds increasingly like everyday life in the United States — and they don’t need a warrant to do it.

That’s according to reporter Jackie Ward from San Francisco-Oakland Bay Area station KPIX, who on Friday revealed she had uncovered a secret government surveillance program in the area that has citizens on edge.

“Imagine standing at a bus stop, talking to your friend and having your conversation recorded without you knowing.  It happens all the time, and the FBI doesn’t even need a warrant to do it,” Ward first reported Friday. “Federal agents are planting microphones to secretly record conversations.”

Some of the recording devices in the Bay Area have been hidden under rocks, in trees, and anywhere else the FBI could imagine.

It began in Oakland in March 2010, recent court documents revealed. The FBI started by secretly hiding microphones inside the light fixtures and around a bus stop outside the city courthouse, recording the conversations being had there over a 10-month period.

The plot was revealed after evidence was submitted in a suspected illegal real estate investing scheme.

The FBI claimed investors were rigging bids and committing fraud, and used the captured recordings as evidence.

The act has privacy advocates upset — and some lawyers are saying the government’s actions are illegal.

According to Ward, the lawyer for one of the accused real estate investors will ask the judge to throw out the recordings.

But even more troubling is that the FBI apparently recorded conversations from countless people who had nothing to do with the case — innocent citizens who had their privacy invaded by Uncle Sam.