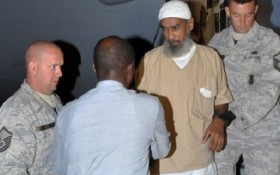 He may be one of the most dangerous terrorist leaders in the world today. He could be in line to become a top leader in Al Qaeda.

And it looks like he has President Barack Obama to thank for his freedom.

A shocking new report, first published by Fox News, proves that Sudanese native Ibrahim al Qosi is quickly rising up the ranks of Al Qaeda, just four years after the Obama Administration quietly allowed him to be freed from the Guantanamo Bay Detention Camp (Gitmo).

Obama, who has been pledging for years to close Gitmo, has promised the American public that only low-level security threats had been released so far.

But in the case of Qosi, Obama has been caught in a clear lie.

Qosi was once a trusted aide to none other than Al Qaeda leader Osama Bin Laden before he was first sent to Gitmo in 2002. But Qosi was released with very little fanfare in 2012, after promises that he would retire quietly to Sudan.

Now, of course, it appears Qosi has very different plans.

He has practically become the face of Al Qaeda in the Arabian Peninsula, recording numerous propaganda videos for the group.

Even more concerning, he has been leading calls for terrorists to stage a government overthrow in Saudi Arabia — a move that would destabilize the entire Middle East.

Qosi has also demanded an end to diplomatic relations between Saudi Arabia and the United States.

Qosi’s release and his quick return to Al Qaeda leadership has security experts warning that other Gitmo detainees released by Obama will likely follow suit.

“I would not be surprised if one day the chief of Al Qaeda is someone who was released from Gitmo,” Ryan Mauro, a national security analyst for the Clarion Project, told Fox.