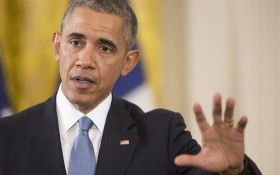 Newly released federal documents are proof that the Obama administration meddled with the federal terror watch list, demanding that 1,000 individuals with suspected ties to terror groups have their names removed or their records modified, according to a government watchdog.

And American citizens may have died as a result.

Judicial Watch, non-partisan transparency organization that has been investigating the issue, recently obtained 183 pages of documents from the Department of Homeland Security. And the files show that the Obama administration was involved in scrubbing the agency’s “Terrorist Screening Database” to ensure that the civil rights of suspected Islamic militants were protected.

In fact, the documents reveal that the Obama administration reportedly created a “hands off” list that allowed individuals to enter the United States who had previously been denied entry because of their suspected ties to terror groups.

The notion that this “hands off” list existed was first floated by border agents and Iowa Sen. Charles Grassly in 2014. The information released to Judicial Watch seems to confirm that the list is very real.

In fact, some of the suspected terrorists that the Obama administration reportedly ordered a “hands off” approach to had ties to groups ranging from the Muslim Brotherhood to Hezbollah and Hamas.

Federal officials were allegedly told that to be included on the terror watch list, you had to have connections to other known terrorists — and not just certain groups.

Judicial Watch has raised concerns that by modifying the terror database, the Obama administration may have removed information that could have stopped the San Bernardino, California shootings in December that killed 14. The shooters were radicalized Muslims who had pledged their support to ISIS, and at least one had ties to overseas groups linked to terror.