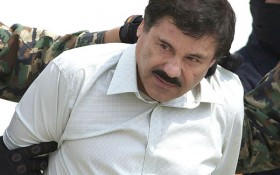 The notorious Mexican drug lord Joaquin “El Chapo” Guzman shocked the world when he escaped from a Mexican maximum-security prison in July, using an elaborate tunnel that was dug to his shower stall.

Now, his daughter has revealed how he pulled off the stunt — by openly buying off the Mexican government.

According to a recent interview with The Guardian, Rosa Isela Guzman Ortiz said “El Chapo” bankrolled multiple high level officials during their election campaigns and, in return, they helped him break out of jail.

“What El Chapo’s daughter said is a strong revelation, which must be investigated and must be taken seriously,” responded Mexican presidential candidate Andres Manuel Lopez Obrador, who leads polls for the country’s 2018 elections. “[President] Pena Nieto cannot stay silent.”

When Guzman was first imprisoned in 2014, Mexico’s then-attorney general vowed the drug chieftain would only be extradited to the U.S. “in 300 or 400 years” after serving his Mexican sentence.

But then “El Chapo” pulled off a brazen escape, coolly stepping into a hole in the floor of his prison cell shower and whizzing to freedom on a motorcycle modified to run on tracks laid the length of the tunnel. There have long been questions about how prison officials could have been unaware that such a sophisticated tunnel was being built directly under their facility.

Even while in prison, Guzman lived a comfortable life.

In a recent court filing shared by his lawyers, Guzman described a relatively permissive environment with plenty of access by outside visitors and some freedom to move around.

Raul Benitez, a security specialist who teaches political science at the National Autonomous University of Mexico, said during that earlier imprisonment authorities “practically let him open an office in the prison to run his businesses.”

President Enrique Pena Nieto was embarrassed by the escape in July, Guzman’s second from a maximum security prison. The first escape was in January 2001 from a prison in Jalisco state.