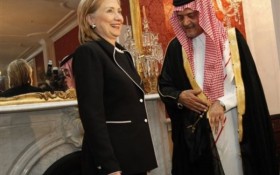 She’s promised to make her campaign about average, working-class Americans. She was even going to stand up to the wealthy elite.

As long as those wealthy elite aren’t from Riyadh or Mecca.

New evidence shows that wealthy Saudi Arabian interests continue to invest heavily in getting former Secretary of State Hillary Clinton elected president. And Clinton’s ties with one of the world’s most brutal regimes may run deeper than anyone had imagined.

The problem? The company is owned by top Clinton fundraiser Tony Podesta and the contract comes at a time when the Saudi government is facing international scrutiny over airstrikes in Yemen and a crackdown on Saudi political opponents.

Foreign policy analysts see the move as a transparent attempt by the Saudis to influence Clinton and show their support for her candidacy.

And why not? The Clintons have demonstrated a long-term willingness to expose themselves to Saudi money and influence.

The Clinton Foundation has accepted millions from both the Saudi government and its thinly veiled PR firm, known as Friends of Saudi Arabia.

The cozy financial relationship between the Clintons and the Saudis received new scrutiny in 2011, when a State Department led by Hillary Clinton cleared a massive arms deal with Saudia Arabia. The deal reportedly had U.S. ally Israel fuming.

Saudi Arabia is consistently rated as having one of the worst human rights records in the world, and the country is seen by many as a breeding ground for terrorism.

Saudi King Salman bin Abdulaziz Al Saud has been criticized for a history of funding and supporting radical Islamic groups everywhere from Africa to Europe.