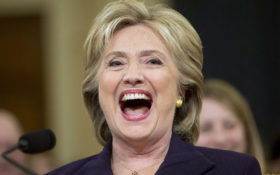 A new book about the 2016 presidential election reveals twice-failed Democratic presidential nominee Hillary Clinton went on “f***-laced fusillade” regarding President Donald Trump during a 2016 debate preparation session when she realized she was unappealing to voters — and could lose the election.

The book uncovers the inside story from the Clinton campaign, and Hillary struggling to convey herself as a genuine nominee to voters. In fact, the twice-failed presidential candidate had a profanity-laced meltdown at aides when told she appeared inauthentic.

“Aides understood that in order to keep it all together onstage, Hillary sometimes needed to unleash on them in private,” Chozick wrote in the book, according to The Guardian.

And that she definitely did…

“‘You want authentic, here it is!’ she’d yelled in one prep session, followed by a f***-laced fusillade about what a ‘disgusting’ human being Trump was and how he didn’t deserve to even be in the arena,” Chozick writes.

Chozick’s book also points out that Hillary struggled with bridging the generational gap between her aides and the Clinton family.

There were reportedly several arguments regarding strategy on how to deal with Trump’s attack and former President Bill Clinton’s sexual assault allegations.

According to Chozick’s book, Hillary had a breakdown when she heard that actress Lena Dunham — a big supporter of her campaign — said she was “disturbed by how, in the 1990s, the Clintons and their allies discredited women” when Bill was accused of rape.

The generational gap led one Hillary aide, Robby Mook, to “respectfully” listen to Bill, but mock the former president behind his back and perceiving him as “a relic, a brilliant tactician of a bygone era.”

Chozick writes in her book, Bill understood “Trump had a shrewd understanding of the angst that so many voters – his voters, the white working class whom Clinton brought back to the Democratic Party in 1992 – were feeling.”

Trump has taken an appreciation for how many of conservative Americans felt being left behind by his predecessor — while Hillary was more concerned with covering up her own scandals than taking a genuine look at what voters wanted.

More Americans wanted to “Make America Great Again” — and over a year later we still have no regrets electing Trump.