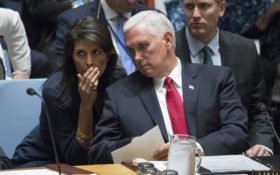 They tried to undermine President Donald Trump at every turn from the day he announced his candidacy.

And a new rumor circulating throughout the White House has people wondering if United Nations Ambassador Nikki Haley is considering a run in 2020.

They threw everything but the kitchen sink at him!

He won – and won big – humbling the party’s mainstream wing and silencing his biggest critics.

In public, they’ve fallen into line and most are now praising him.

But behind the scenes, they could be quietly trying to undermine him – and the media is pushing for the establishment to replace him.

A recent New York Times report about Haley had a bombshell hidden deep within the story:

“Republicans close to the White House whisper about the prospect of an alliance between Ms. Haley and Vice President Mike Pence, possibly to run as a ticket in 2020,” the newspaper reported.

The Times said aides to both “scoff” at the suggestions, and other insiders were quick to throw cold water on the idea.

Pundit Ed Morrissey of Hot Air dismissed the concept as “wishful thinking,” and maybe it is… but who is doing the wishing? If it’s low-level staff gossip it would hardly be worth a mention in the New York Times.

But if it’s GOP operators and longtime DC insiders sharpening their knives for some back-stabbing, then it could be the kind of soft coup Trump supporters have feared. It could be evidence of a plan to either cripple him so badly that he can’t run in 2020, or send establishment Republicans out to run against him in a primary if he does anyway.

Pence likely would have no part in that second possibility.

If Haley is fired from her job, however, the establishment wing may have found its champion.

Some are quietly saying they don’t even want to wait until 2020.

One Republican member of the House said Trump could be ousted as soon as this summer.

This unnamed lawmaker told a conservative columnist and radio host Erick Erickson that he was sick to death of the “idiot” president.

“Idiot” is one of the few words we can print from the profanity-laced tirade.

Privately, he’s supposedly been scheming against the White House, saying some House insiders may be waiting to clear their primaries this summer before publicly opposing Trump.

Once that competition is gone, they could be ready to act if given a reason – and this lawmaker allegedly said two things could make it happen.

If Trump fires special prosecutor Robert Mueller and it looks like the GOP is going to lose big in the upcoming midterm elections, they could act swiftly to force him out of office.

“I’d vote to impeach him myself,” he said. “Most of us would, I think. Hell, all the Democrats would and you only need a majority in the House. If we’re going to lose because of him, we might as well impeach the mother*******. Take him out with us and let Mike take over. At least then we could sleep well at night.”

As loyal as Pence is, there’s no doubt he would gladly take swift ownership of the Oval Office if Trump is pushed out via impeachment.

No one reaches his position without at least dreaming of sitting in that chair.

And if he does, he’d have to name a new vice president. Haley would certainly come to mind.

Maybe that report isn’t just “wishful thinking” after all… and maybe there’s more than just the House and Senate on the line in this year’s midterm elections.