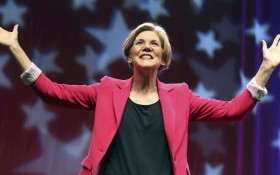 There’s currently a humanitarian crisis at the U.S.-Mexico border — one that President Donald Trump warned Congress about months ago.

Hundreds of thousands of migrants have arrived in America this year and detention facilities are at a breaking point. An unknown number of dangerous criminals have likely snuck into the U.S.

Now, Democrat presidential hopeful Sen. Elizabeth Warren, D-MA, is promising that on her first day in the White House – assuming she wins the 2020 election – she will create a commission to investigate “crimes committed by the United States against immigrants.”

While speaking the leftist Netroots Nation conference, the Massachusetts liberal unveiled her plans to go after Americans and those who protect the nation… not those who broke the law.

“On my first day, I will empower a commission in the Department of Justice to investigate crimes committed by the United States against immigrants,” Warren declared to the crowd.

Warren then launched an outrageous attack on Border Patrol agents and other immigration departments by hurling baseless accusations that they are making life difficult for illegal immigrants.

Warren’s threats to “anyone working in the system” were not spur-of-the-moment or random.

Many of her salacious comments are detailed in her immigration plan, titled, “My Plan for Immigration Reform.”

As part of her radical, open border agenda, Warren states that she will create a task force within the Department of Justice that has “independent authority” to investigate “any substantiated criminal allegations” of medical neglect or physical and sexual assault.

“Let there be no ambiguity on this,” she wrote, “if you are violating the basic rights of immigrants, now or in the future, a Warren administration will hold you accountable.”

Warren continues to imply that Border Patrol agents are sexually assaulting migrants without evidence — and that’s not all.

After smearing those who risk their lives every day to secure the border and look after migrants, Warren has also attacked President Donald Trump.

Warren blames the president in her immigration plan for the “crisis” at the border.

Months ago, Warren and her fellow Democrats called the president a liar and claimed the border crisis was “manufactured” and “made-up.”

According to Warren’s published plan: “President Trump has weaponized deportation in ways that are costly, ineffective, and designed to maximize pain. It’s time to end this cruelty — and refocus on true threats to public safety and national security instead.”

Referring to an “obsessive focus” on border enforcement, Warren wrote:

And under Trump, it has become increasingly abusive. We should repeal this criminal prohibition to prevent future abuse. As president, I will immediately issue guidance to end criminal prosecutions for simple administrative immigration violations; end Operation Streamline, which subjects migrants to mass prosecutions; and refocus our limited resources on actual criminals and real threats to the United States. I will also issue prosecutorial guidance to prioritize immigration cases with security concerns, and make sure government attorneys are properly exercising their discretion for individuals who pose no public safety risk.

It speaks volumes that Warren’s plan to “fix” America’s broken immigration system is to accuse Border Patrol agents of sexual misconduct, keep the border open, and close down detention facilities so that migrants can roam free in the country.

That is… if she ever gets into the White House.