Exposed! The danger of liberal media bias - The Horn News 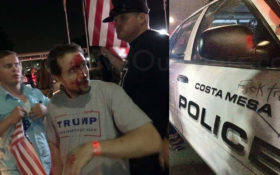 Throughout the entire presidential election, the mainstream media proved again and again that they were shamefully biased for Democratic nominee Hillary Clinton.

Despite their best efforts, the election results went against them. So the media talking heads have shifted their bias towards her whining supporters who refuse to accept the election results – and their coverage is so dangerous and irresponsible, it may be causing deaths.

Following the announcement of President-elect Donald Trump’s victory, there has been an increase in violence between supporters on both sides. But while there are instances of shameful misbehavior committed by Trump supporters and by Hillary supporters, the mainstream media only seems interested in reporting on one side.

It’s no surprise who they’re favoring.

Since the election, there have been multiple reports of hate crimes and racial slurs coming from Trump supporters. On November 17th, CNN posted an article titled, “’Make America White Again’: Hate speech and crimes post-election.” The article details graffiti of swastikas and reported on threatening notes being sent to Muslims.

On November 15th, Salon reported, “’Violent’ anti-Donald Trump protests met with violence from Trump supporters.” The article notes multiple incidents of violence against Trump protesters, but never provides proof that those acting violent are actually supporters of the president-elect.

One of the incidents detailed is that of protester and Ohio State University student Timothy Adams being tackled by fellow student Shane Michael Stanton down the stairs. The video quickly went viral as an example of Trump supporters acting out in violence.

Here’s where the story starts to fall apart. See, Adams actually has Asperger syndrome… and is not a Trump supporter.

After CNN picked up the story, Ohio State students took to Twitter to clear up the confusion surrounding the situation.

The kid actually has Asperger syndrome. Report that as well before making him look like a monster. https://t.co/x5ujxaS9PW

No act of violence or hate speech is acceptable, and it’s time for the media to report on both sides. Their inaccurate portrayal of Trump supporters as violent, and Hillary backers are peaceful, isn’t just dishonest.

The liberal media has done such a terrible job, they’re whipping up a frenzy of attacks AGAINST Trump backers.

There have been multiple substantiated cases of violence against Trump supporters – and the mainstream media has totally ignored them.

The Daily Caller reported, a Chicago man was brutally attacked by a group of black men after they realized he voted for Trump. He was dragged out of his car and kicked multiple times while onlookers laughed and screamed, “you voted Trump, beat his ass, don’t vote Trump!”

A 74-year-old man was assaulted and thrown to the ground by a 23-year-old female Black Lives Matter activist named Shacara McLaurin outside of Trump Tower during a protest.

Campus Reform reported a student at Towson University was assaulted while leaving class allegedly for wearing a “Make America Great Again” hat. The man claimed he was spit on and slapped in the parking lot at the University. In Connecticut, a man was beaten by two thugs for holding a Trump sign and the American flag at an intersection.

In Texas, an elementary school student was beaten by several of his classmates for voting for Trump in a mock election, Fox 26 Houston reported. And in Virginia, another child was hospitalized by an angry mob of other students when he voiced support for the president-elect.

A young girl was attacked by an angry mob in California as well for voicing her support for Trump.

The media’s spin has gotten so bad, in fact, that it may have caused a murder.

In Georgia, a man was fatally shot outside of a bar for suggesting he might vote for Donald Trump, WSBTV reported. According to The Daily Caller, “Mitchell Mormon Jr. was gunned down outside of a popular, Atlanta, Georgia, bar early Sunday morning shortly after entering into an argument over Donald Trump’s immigration plan.”

While all of these horrific attacks were reported by small, local sources, they are failing to appear on the front page of any major news source.

Violence as a result of the election is not acceptable in any case, by either Republicans or Democrats.

At the end of the day, were are all Americans. It is our duty to respect one another regardless of our political beliefs.

But it’s also the job of the mainstream media to provide unbiased, unfiltered news to the public, and in the instance of post-election violence they’ve failed.

And it may be inciting retaliations.