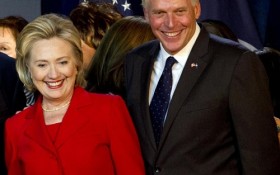 It appears to be an effort to rig a crucial swing state for Hillary Clinton — and if Democrats have their way, several other states may roll out the same strategy.

Virginia’s Democratic Governor Terry McAuliffe, a longtime Clinton ally, has just given 206,000 convicted felons – including known murderers, rapists, and child molesters – the right to vote in the all-important swing state this November.

Although Virginia law already allows ex-cons to vote after meeting certain conditions, on Friday McAuliffe signed an executive order waving any requirements and granted every felon who is no longer in prison or on parole the right to vote without making any restitution.

And McAuliffe knows those voters will overwhelmingly vote for one candidate…Hillary Clinton.

McAuliffe had the state’s Department of Elections comb through public records to make sure not a single eligible ex-con was left out, regardless of how heinous their crimes. They don’t even have to pay the court costs or fees they owe the state before casting their ballots.

Thanks to McAuliffe’s executive order, “a murder victim won’t get to vote, but the man that killed them will,” said Republican state Delegate Robert B. Bell.

These convicted felons may as well start their own Super PAC, “Cons for Clinton.”

An in-depth study from 2002, funded by George Soros, found that about 70 percent of convicted felons would vote for the Democratic candidate, if they could vote.

That could go a long way to locking the swing state of Virginia, and its 13 electoral votes, behind Hillary Clinton. Most of the modern presidential elections in Virginia have been decided by 150,000 to 300,000 votes.

About 242,000 more Republicans than Democrats voted in this year’s presidential primaries. McAuliffe’s amnesty may go a long way toward making up that gap.

That would suit McAuliffe’s decades-long political ambitions. He was co-chairman of Bill Clinton’s presidential election in 1996, then ran the Democratic National Committee before taking over Hillary’s first presidential campaign in 2008. McAuliffe just hosted a $2 million fundraiser for Hillary’s second presidential run in his mansion in the D.C. suburb of McLean.

When asked about how his move would benefit Hillary’s electoral fortunes, McAuliffe replied, “Honestly, I haven’t thought about it.”

But Republicans don’t buy that. The state’s Speaker of the House William J. Howell, R-Stafford, said, “The singular purpose of Terry McAuliffe’s governorship is to elect Hillary Clinton president of the United States. This office has always been a steppingstone to a job in Hillary Clinton’s cabinet.”

He may not even be done yet. The Washington Post reported that the governor could “sign an identical executive order every month for the remaining two years of his term to cover violent felons who get out of prison each month.”

Responding to objections that this is a transparent political ploy, McAuliffe said Sunday, “I would tell the Republicans quit complaining and go out and earn these folks’ right to vote for you.”

The governor also instructed conservatives to be “very careful of their rhetoric,” signaling that he intends to play the race card against anyone who objects.

Giving felons the right to vote could radically alter the political landscape. The ACLU estimates that there are about 5.85 million ex-felons whose voting rights could be restored nationwide. That could mean up to 4,095,000 new Democratic voters.

Restoring felon voting rights is part of a nationwide plan by the Democratic party to stuff those votes in ballot boxes this November — just in time for Clinton. A similar measure recently passed in Maryland (over a Republican governor’s veto), while lawmakers in both Kentucky and Florida are debating restoring the voting power in those states.

Most people think child molesters, rapists, and murderers deserve to be shot. The Democratic Party thinks they deserve to choose the next leader of the free world.

But McAuliffe draws the line somewhere. Speaking on ABC’s “This Week” program on Sunday, he told those same felons, “I’m not giving you gun rights back.”