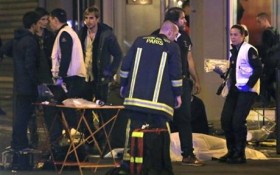 The U.S. stands “in solidarity with France, as it has stood with us so often in the past,” U.S. Attorney General Loretta Lynch said after this week’s terror attacks in Paris. “This is a devastating attack on our shared values and we at the Department of Justice will do everything within our power to assist and work in partnership with our French law enforcement colleagues.”

A series of attacks from ISIS extremists targeting young concert-goers and French citizens enjoying a Friday night out at popular Paris nightspots killed 129 people. It was the deadliest violence to strike France since World War II.

President Francois Hollande pledged that France would stand firm against the terrorism, and the French military has already begun bombing ISIS targets.

The worst carnage was at a concert hall hosting an American rock band, where scores of people were held hostage and attackers fired explosives and bullets at their captives. Police who stormed the building, killing three attackers, encountered a bloody scene of horror inside.

Hollande declared a state of emergency and announced that he was closing the country’s borders. The violence spread fear through the city and exceeded the horrors of the Charlie Hebdo attack just 10 months ago.

U.S. President Barack Obama, speaking to reporters in Washington, called the attacks on Paris “outrageous attempt to terrorize innocent civilians” and vowed to do whatever it takes to help bring the perpetrators to justice. He called the attacks a “heartbreaking situation” and an “attack on all of humanity.”