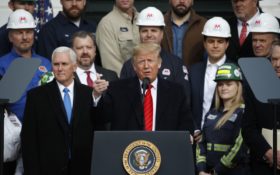 The impeachment saga from inside Capitol Hill has taken up nearly every waking minute of every news station in the United States.

Republicans and Democrats have been at odds over President Donald Trump’s trial for quite some time now.

But behind-the-scenes and away from the press, Trump’s best work as president is being done — and it’s being under-reported.

Trump’s official signing of the United States-Mexico-Canada Agreement (USMCA) Wednesday wasn’t aired on most cable news networks live, despite being a massive breakthrough for America’s workers.

The President has officially signed the USMCA, fulfilling yet another promise to repeal the broken NAFTA

This is a historic moment for the country

Yet CNN & MSNBC refused to carry it live

RT so they can’t ignore this massive WIN for America! pic.twitter.com/xJJ4E69nMO

Trump on Wednesday signed into law a major rewrite of the rules of trade with Canada and Mexico that he said replaces the “nightmare” of a Clinton-era agreement and will keep jobs, wealth, and job growth in America.

At least 40% of vehicles would also have to originate in places where workers earn at least $16 an hour. That would benefit the United States and Canada — not Mexico, where auto assembly workers are paid a fraction of that amount.

Fox News’ Bret Baier is calling the deal “the single biggest bipartisan legislative victory for this president and for this administration.” The agreement is the biggest trade deal in history, covering “more than $1.3 trillion in commerce.”

The deal was just the latest agreement secured after the Trump administration settled a historic trade bargain with China — a deal also highly praised by financial experts but largely uncovered by cable news.

Together, the two deals make for a good 2020 start for America.

“This is a cutting-edge, state-of-the-art agreement that protects, defends, and serves the great people of our country,” Trump said in a signing ceremony. “Together we are building a glorious future that is raised, grown, built and made right here in the glorious U.S.A.”

The new pact joins the recent signing of a “phase one” agreement with China and dials down trade tensions that contributed to slowing economic growth globally.

Despite being a major win for American workers, 4 in 5 Americans say they have heard little or nothing about it on the news.

Indeed, while a third of the public approves of the deal and only 5% disapprove, a solid majority, 61%, have not formed an opinion, according to a recent poll conducted by Monmouth University.

The two trade deals with America’s major partners isn’t the only news from the Trump administration largely overlooked by cable news networks.

The Mideast peace plan announced by Trump on Tuesday was a sweeping and ambitious plan to finally end violence in one of the most dangerous places on Earth.

Trump’s plan envisions a new Palestinian state that turns over parts of the West Bank to Israel in exchange for huge land tracts in Gaza. While it sides with Israel on some key contentious issues that have bedeviled past peace efforts, including borders and the status of Jerusalem and Jewish settlements, and also proposed granting the Palestinians their long-hoped-for state.

Palestinian President Mahmoud Abbas has received the proposal with caution. His Israeli counterpart, President Benjamin Netanyahu, called it a “historic breakthrough” equal in significance to the country’s declaration of independence in 1948.

“This dictates once and for all the eastern border of Israel,” Netanyahu told Israeli reporters later. “Israel is getting an immediate American recognition of Israeli sovereignty on all the settlements, without exceptions.”

Trump called his plan a “win-win” for both Israel and the Palestinians, and urged the Palestinians not to miss their opportunity for independence. But Abbas, who accuses the U.S. of unfair bias toward Israel, has remained unmoved.

Still, supporters say even a small step towards peace and negotiation is a victory for Americans, Israelis, and Palestinians.