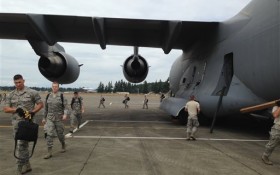 As military helicopters ferry search and rescue teams over the Pacific Northwest, below them are scenes of devastation from a giant earthquake that could strike the region at any time.

Tsunami waters surge through coastal communities. Buildings, bridges and roads lie in ruins. Fires burn out of control. Survivors are stranded on rooftops, cling to floating debris or are trapped inside wrecked buildings.

Seismologists say a full rupture of a 650-mile-long offshore fault running from Northern California to British Columbia and an ensuing tsunami could come in our lifetime, and emergency management officials are busy preparing for the worst.

Federal, state and military officials have been working together to draft plans to be followed when the “Big One” happens.

These contingency plans reflect deep anxiety about the potential gravity of the looming disaster: upward of 14,000 people dead in the worst-case scenarios, 30,000 injured, thousands left homeless and the region’s economy setback for years, if not decades.

As a response, what planners envision is a deployment of civilian and military personnel and equipment that would eclipse the response to any natural disaster that has occurred thus far in the U.S.

There would be waves of cargo planes, helicopters and ships, as well as tens of thousands of soldiers, emergency officials, mortuary teams, police officers, firefighters, engineers, medical personnel and other specialists.

“The response will be orders of magnitude larger than Hurricane Katrina or Super Storm Sandy,” said Lt. Col. Clayton Braun of the Washington State Army National Guard, referring to two of the best-known natural disasters in recent U.S. history.

Since 2013, Braun has led a team at work on putting together a military response plan for Washington state, to be used in conjunction with efforts by state and federal civilian agencies.

Oregon’s response plan is called the Cascadia Playbook, named after the threatening offshore fault — the Cascadia Subduction Zone. The plan, unveiled last year, has been handed out to key officials so the state can respond quickly when disaster strikes.

“That playbook is never more than 100 feet from where I am,” said Andrew Phelps, director of the Oregon Office of Emergency Management. When Phelps goes out to dinner, he keeps the playbook in his car for quick access.

A magnitude 9.0 earthquake and tsunami that devastated parts of Japan in 2011 gave greater clarity to what the Pacific Northwest needs to do to improve its readiness for a similar catastrophe.

“The Japanese quake and tsunami allowed light bulbs to go off for policymakers,” Phelps said.

Federal and state emergency planners, as well as military officials, have been holding meetings to identify what can be done to lessen loss of life and to put the region in a better position to recover.

Much still needs to be done, and it is impossible to fully prepare for a catastrophe of this magnitude, but those responsible for drafting the evolving contingency plans believe they are making headway.

The plans call for using a tiered system for delivering personnel, gear and supplies into the devastated region.

Large cargo planes, like the military’s C-5 Galaxy, would land at airports or air bases capable of handling them, and then progressively smaller aircraft would be used to get personnel and supplies to smaller airfields close to devastated areas.

Helicopters will play a crucial role, especially in coastal communities, which would likely be unreachable by road because of destroyed bridges and roads. Ships will likely be needed to assist with the delivery of emergency supplies and to assist with the evacuation of displaced and injured people.

Emergency medical facilities to treat the injured will be set up because hospitals on the coast will probably be too damaged to use. Collection points for bodies will be created. Hotels, motels, college dorms, sports arenas and government facilities would be used as temporary shelters for evacuees.

Military and civilian engineers will be sent in to begin repairing an infrastructure that could be shattered in the western — and most populated — third of the Pacific Northwest.

Worst-case scenarios show that more than 1,000 bridges in Oregon and Washington state could either collapse or be so damaged that they are unusable.

The main coastal highway, U.S. Route 101, will suffer heavy damage from the shaking and from the tsunami. Traffic on Interstate 5 — one of the most important thoroughfares in the nation — will likely have to be rerouted because of large cracks in the pavement.

Base camps will be set up for emergency responders coming in from across the country, planners say, as will areas for the distribution of critical supplies such as water, food, tents, blankets and medical supplies.

Seattle, Portland and other urban areas could suffer considerable damage, such as the collapse of structures built before codes were updated to take into account a mega-quake. Specially trained urban search and rescue teams would be sent to look for survivors in the ruins of destroyed buildings.

Phelps said he has learned to live with the threat from the Cascadia Subduction Zone. Still, “it’s a little unsettling to know that in five minutes I might have to grab that playbook and call the governor,” among others.