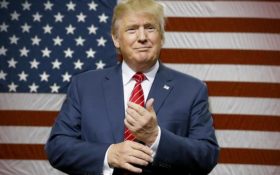 There’s a money trail to the White House — and Goldman Sach’s top analysts say donations, a strong economy and loyal voters will lead to President Donald Trump’s re-election in 2020.

The commander-in-chief’s reelection campaign received good news over the past few days. The first quarter fundraising numbers were released for the entire field of participants.

Trump crushed them all.

And then the investment bank Goldman Sachs made an early prediction that Trump will win the 2020 election, regardless of who ends up with the Democratic nomination.

“President Trump is more likely to win a second term than the eventual Democratic candidate is to defeat him,” the bank said, as reported by Yahoo.

The Wall Street firm believes that Trump’s biggest boost will be from a guaranteed incumbency and a healthy economy. History suggests that a strong economy predicts elections more than anything else. Similar strong economies helped propel the reelections of George Bush in 2004 and Ronald Reagan in 1984.

But it’s not just the economy. Turmp is the benefactor of generous campaign donations, outpacing every top Democrat with $30 million raised in the first three months of 2019, according to The Hill.

Not one candidate comes close to matching that support.

And according to Trump’s campaign, it’s almost all grassroots support. Nearly 99 percent of his contributions to the committee were under $200.

Unlike many other presidents, Trump began his campaign for reelection early. Now he’s reaping the rewards.

The so-called champion of the people, Sen. Bernie Sanders, I-V.T., raised roughly $18 million in the first quarter. As for the other candidates, whether Sen. Kamala Harris, D-Calif., or Sen. Elizabeth Warren, D-M.A., they all seem far, far behind.

Meanwhile,  Trump seems to be maximizing the money from his base and by doing so, accruing more than several Democratic candidates combined.