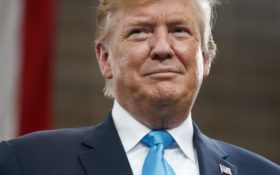 Economic and election forecaster Stephen Moore has predicted that if President Donald Trump secures one major deal, he is going to win in a “40-state landslide.”

During an interview Saturday with Breitbart News, Moore predicted that Trump will win roughly 80 percent of the entire electorate in 2020 if he secures a favorable trade deal with China – something no other president has been able to accomplish.

“We’re in a new kind of cold war with China … the U.S. cannot back down” Moore said.

Moore went on to admit that he’s a “free trade guy” and has not always supported using tariffs as a tool in trade negotiations, but admitted that he’s “totally” with the president on slapping them on China to keep them at the table.

“There’s nothing that Trump is asking China to do that is not completely reasonable. China should open up Americans, China should stop cheating and stealing and those kind of things,” Moore said.

“I think this gives him additional leverage now to get a deal with Beijing,” he added.

Moore went on to note how Trump’s threat of tariffs recently worked with Mexico and forced them to finally do something about their problems spilling over into America.

After Trump threatened to slap them with a 5 percent tariff, Mexico sent high-ranking officials to Washington, D.C., and worked out a deal with the Trump administration in a few days.

Mexico agreed to substantially increase its operations to combat, deter, and prevent tens of thousands of illegal aliens and migrant caravans from traveling to the U.S.

Moore predicted that this strategy will also work with China, arguing that if Trump gets a deal with China by the end of the year he will be “home free” with a soaring U.S. economy and stock market.

He said this will lead to a “40 state re-election landslide” victory for Trump in 2020.

Moore is hardly the first election forecaster predicting that Trump is on pace to a victory in 2020 if things continue to go so well with the economy.

American University Allan Lichtman – who has correctly predicted the last nine presidential election winners – predicts Trump is on pace for a second term in office.

In his book, titled, “Predicting the Next President: The Keys to the White House 2016,” Lichtman outlines 13 key factors in determining who will win the election.

According to his model, which has been correct for nearly 30 years, Lichtman says the incumbent president will lose re-election if six or more of the 13 keys are false by the election.

Of those 13 key factors, Lichtman says Trump is only “down” in three key areas and “up” in the other 10.

In May, Steven Rattner published an op-ed for The New York Times, entitled, “Trump’s Formidable 2020 Tailwind,” where he cites three different modelers that are predicting a Trump landslide.

Rattner, who served as the Treasury secretary in the Obama administration, says it doesn’t matter who secures the Democratic nomination. Trump is on his way to victory.

He’s not alone. Other experts predicting Trump’s win are:

Remember, almost all of these projections are coming from liberals.

For over two years, Democrats have been in a hysterical rage over Trump’s election victory and obsessed with trying to remove him from office.

Imagine how they will act in 2020 if Trump wins in a landslide and serves for another four years.