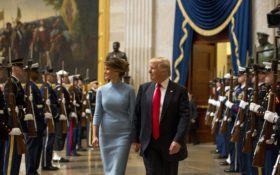 A professor from American University has issued a grave warning for Democrats — President Donald Trump is going to be reelected in 2020.

To insiders, he’s a familiar face. He ignored polls in the lead-up to the 2016 presidential election and predicted Trump’s victory.

And now that November 2020 is just around the corner, Allan Lichtman, a political historian who has correctly guessed the last nine presidential election winners, is saying another Trump victory is at hand.

For more than 30 years, he’s correctly predicted who is going to be seated in the Oval Office.

Lichtman comes to these conclusions from his book, “Predicting the Next President: The Keys to the White House 2016.” The book outlines 13 keys factors in determining who will win the election.

According to his model, if six or more of the 13 keys are false by the election, the incumbent will lose. He’s followed this model for more than three decades, and he’s never missed.

Is Trump a surefire re-election?

Here are the 13 keys, summarized by The Washington Post reporter Peter Stevenson:

So far, Lichtman says that Trump is only “down” in three key areas.

“Currently, the President is down only three keys: Republican losses in the midterm elections, the lack of a foreign policy success, and the president’s limited appeal to voters.”

Remember, this is coming from a liberal professor. And it’s awful news for the Democratic presidential hopefuls.

For years, the left has been in a hysterical rage over Trump’s 2016 victory.