HOW MANY people are expected for the Pope’s visit?! - The Horn News 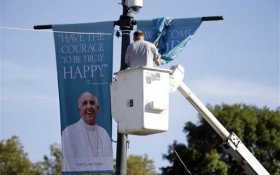 “See you in Philadelphia!” That was the videotaped message Pope Francis issued to American pilgrims.

But even though massive crowds are still expected this week, some logistical problems may leave the attendance numbers for the pope’s visit smaller than they would have been.

Despite an “I’ll be there” marketing campaign, a rollback of some travel restrictions and an increase in hotel bookings, signs remain that estimates that up to 1.5 million people would be in town for the pope’s outdoor Mass on Sunday may be too high.

“I look forward to greeting the pilgrims and the people of Philadelphia when I come for the World Meeting of Families,” the pope said in English. “I will be there because you will be there!”

The pope’s appeal was the culmination of a monthlong effort by planners to turn around the public perception that security and travel restrictions — including initial warnings, since dialed back, that visitors would have to walk miles — had made it too much work to come see Francis.

What’s more, the Secret Service said Friday that the mile-long Benjamin Franklin Parkway, the secured site of the pope’s two biggest events, would only fit about 250,000 people. Other visitors will have to watch on jumbo TV screens near the parkway or in other locations around the city, which church planners said was always the plan.

Heading into the final week before the pope’s U.S. trip, hotels in Philadelphia had more than 1,000 rooms available. Regional transit agency SEPTA had sold only about a third of its papal visit rail passes, and the southern New Jersey commuter rail, PATCO, less than a sixth. PATCO even said it would let pilgrims buy same-day tickets if they want. Charter bus reservations are also a fraction of what was projected.

And a plan to turn Fairmount Park, one of the largest urban green spaces in the nation, into “Francis Fields” campground was scrapped due to a lack of interest.

But getting to the papal events has been made easier in recent weeks.

SEPTA doubled the number of subway stops it will keep open during the visit — including one two blocks from Francis’ Independence Hall speech on Saturday. Once reserved for buses, huge parking lots just across the Delaware River in Camden, New Jersey, were opened up to thousands of cars to reduce how far people will have to walk.

Papal visit organizers said they realized they needed to hit the reset button when a satirical security map appeared, showing the city surrounded by lava and guarded by flying pterodactyls.

The result was the “I’ll be there” campaign, complete with posters of a smiling Francis.

After weeks of warning visitors that seeing the pope could be hard work, Mayor Michael Nutter declared: “This city will be the place to be that entire weekend and best of all it will be surprisingly easy to get here to enjoy it.”

Former Gov. Ed Rendell was an early critic of the plan to fence in the parkway, where the pope’s two biggest events will be held, and require those wanting to get inside to go through airport-style detectors. He had made the point repeatedly that papal visits earlier this year to Ecuador, Paraguay and Bolivia didn’t require fencing.

The city’s mistake, he said, was not pushing back early enough against some security demands.

“I think they repaired some of the damage,” he said. “Attendance will be strong, but not what it might have been.”

Matters were not helped by the announcement just a few weeks ago that only ticketholders would be able to get within three blocks of the pope when he attends the closing festival of the World Meeting of Families on Saturday and celebrates Mass the next day, both on the parkway.

Responding to a public outcry, event planners made 10,000 tickets available to the public each day. They also announced papal parades both days on the parkway so some non-ticketholders could see Francis close up.

Even with the removal of some travel hurdles, a nearly 5-square-mile area of the city will be barred to incoming traffic during the pope’s visit, about 25 miles of streets and highways will be closed and the Benjamin Franklin Bridge between New Jersey and Philadelphia will be off-limits to all but pedestrians and emergency vehicles.

Philadelphia Archdiocese spokesman Ken Gavin said it was important to tell people early on about some of the travel challenges. “You have to be realistic with folks,” he said.

“The final message is, ‘Come, be here and you will always be glad you (did),'” he said.