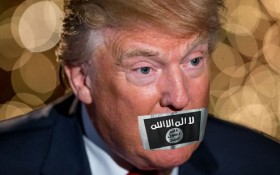 If you can judge a man by his enemies, supporters say that GOP frontrunner Donald Trump has all the right ones.

A coalition of Islamic radical groups — some with ties to terror organizations — are looking to take over the 2016 presidential election.

Their plan is to register a million U.S. Muslims to vote so that Trump’s “candidacy never succeeds.”

An investigation by The Horn News has revealed that some of the groups behind the scheme, unveiled last December, have relationships and affiliations with organizations including Hamas and the Muslim Brotherhood, whose most famous member was Osama bin Laden.

And their plans may be illegal.

Participants in the get-out-the-vote drive include:

Incredibly, the actions by at least one of these anti-Trump group may have broken U.S. law the day of its announcement.

According to an ICNA press release, ICNA’s vice president, Altaf Husain, said, “We will use every democratic tool [so] that your [Trump’s] candidacy never succeeds.”

But ICNA is a 501(c)3 tax-exempt organization which, under IRS regulations, is not allowed to endorse or try to defeat any specific candidate.

But there is no question which presidential hopeful Muslim voters loathe the most.

A representative for the Virginia mosque said the crowds he’s signing up to vote are “largely motivated by anti-Trump sentiment.”

Trump has said he would halt all Muslim immigration into the United States until a better vetting process is in place and stoked outrage when he said last month that “Islam hates us.”

About 70 percent of American Muslims are Democrats, according to the Pew Research Center.

Almost three-quarters of U.S. Muslims plan to vote for Hillary Clinton, according to a poll CAIR conducted.