[Exclusive] Hillary would control Supreme Court until 2050 - The Horn News 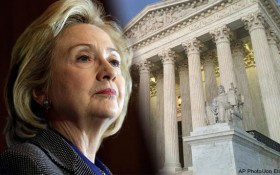 This election isn’t just a fight for the heart and soul of the nation for the next four years.

It’s a battle that could reshape the law in America forever.

The next president has a Supreme Court vacancy to fill right out of the gate, choosing a replacement for conservative icon Antonin Scalia, who died suddenly in February.

That single vacancy will tip the balance of power, with a liberal giving the left a 5-4 majority, while a conservative judge will mean the court will remain mostly conservative, with Reagan appointee Anthony Kennedy often the swing vote.

“An ideological shift in the Court’s membership will alter constitutional law on our most vital issues, affirmative action, abortion rights, immigration, health care, and regulation of corporate money in political elections… just to name a few,” wrote Laura E. Little on Constitution Daily.

But this fight is about more than one vote, because a Clinton presidency could give the left wing the ultimate weapon: A 7-2 liberal super-majority on the Supreme Court that could extend her legacy for decades by establishing over 30 years of legal precedents that experts say are all but impossible to get rid of.

It’s not very far fetched. Consider that the average retirement age for Supreme Court justices is 78, according to The Washington Post.

Kennedy turns 80 this summer, already putting him two years past that age, and two liberal judges are right up there with him: Stephen G. Breyer (who turns 78 this summer) and Ruth Bader Ginsburg (83).

Even if they don’t retire immediately after the election, at those advanced ages the Court won’t exactly stock up on robes in their sizes.

If Clinton wins the presidency, she could end up replacing all four — a clean sweep that would give the Supreme Court four young liberals who would serve for decades, joining the two liberal justices already appointed by President Barack Obama.

An analysis by The Washington Examiner finds that a two-term Clinton presidency could give the Supreme Court a liberal super-majority that could last until 2050, especially if she appoints younger judges.

“That is not an unreasonable prediction,” Leonard Leo, executive vice president of the Federalist Society, told The Examiner. “I think you are looking at two clear seats that would switch parties: Scalia and Kennedy. That puts the number of Democrats to six if you include a Ginsburg replacement, (Elena) Kagan, (Sonia) Sotomayor, Breyer or his replacement.”

This analysis was done before the swirling rumors of Clarence Thomas mulling retirement. While his wife has denied those rumors, his retirement would give Clinton a fifth appointment… and the Supreme Court would have a 7-2 liberal super-majority, with Samuel Alito and Chief Justice John Roberts serving as the only conservatives.

Donald Trump has helped to ease conservative fears over the court by taking the unusual step of announcing in advance the judges he would choose from to fill vacancies, and the list is full of proven conservatives.

That gives Americans two things to vote for this November: a new president to serve the next four years… and what kind of Supreme Court they want for decades to come.