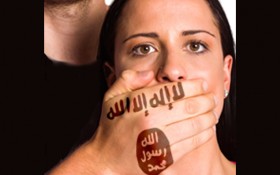 It was a scene straight out of a nightmare: More than 1,000 men took to the streets, robbing, attacking and even raping any woman unlucky enough to cross their path.

But this wasn’t a nightmare.

This was New Year’s Eve in Cologne, Germany – where women trying to enjoy what should’ve been a night of celebration were instead brutally assaulted.

It is the new reality in Western Europe. But few in the mainstream media want to touch it.

In the ultimate kowtow to political correctness, media outlets are shying away from the hot-button issue. Because the attackers were, according to German authorities, “almost exclusively” Muslim refugees and asylum-seekers from the Middle East and Northern Africa, reporters are terrified of seeming racist. So the issue is largely ignored in the West.

“I’m a Syrian! You have to treat me kindly! Ms. Merkel invited me,” one New Years Eve attacker in Germany yelled, according to the newspaper Der Spiegel.

Here’s the truth – hundreds of these incidents are happening all across Europe. Many are being done by migrants. And thousands of these very same Syrian migrants are headed to the shores of the United States.

And those are just the incidents that escape the media blackout. There’s no telling how deep the problem goes, because, according to The Guardian, when these sexual assaults are reported, the attacks are covered up by authorities.

Europe opened the floodgates last year and let in over a million of these refugees, most of them Muslims who had fled Syria, Iraq and other Islamic nations in the Middle East and Northern Africa.

Now, the West is learning the hard way that there’s such a thing as being too welcoming and too compassionate – and law-abiding citizens are living in fear in their own homes.

“The effect is that, in the general public, people no longer feel safe.” Ulrich Karpen, a professor of constitutional and administrative law at the University of Hamburg, told the New York Times.

The situation has the population so on edge, native-born civilians in Germany – where guns are illegal – are stocking up on any weapons they can get a hold of.

If this were a single incident it would be outrageous enough. But just about every major European nation that has welcomed immigrants with open arms has found itself facing waves of violence, including rampant sexual assaults.

In Germany alone, there have been attacks reported in Berlin, Hamburg, Frankfurt, Stuttgart, Bielefeld and Düsseldorf.

Elsewhere in Europe, there have cases of harassment and sexual assaults linked to Islamic immigrants in Norway, France, Switzerland and Finland.

Just this week, the latest disturbing video documenting an assault came out of Sweden. In it two men – apparent migrants from their accents, according to The Daily Mail – harass, grope and demand sex from a Swedish woman they follow down the street.

Ilkka Koskimaki, deputy police chief of Helsinki, Finland said of incidents in his city, “There hasn’t been this kind of harassment on previous New Year’s Eves or other occasions for that matter,” reports AFP news agency. “The suspects were asylum seekers. The three were caught and taken into custody on the spot.”

On the rare occasions the U.S. media has mentioned these horrific sexual assaults, they’ve made excuses – in some cases even claiming it’s because Muslim men from socially conservative countries don’t know how to act around women in Western clothing.

The mayor of Cologne even downplayed the attacks on his own citizens, and said part of the solution is educating immigrants on appropriate and inappropriate behavior.

“We will also have to explain our Carnival better to people from other cultures, so that there’s no confusion about the cheerful behavior in Cologne that has nothing to do with candor, especially candid sexuality,” Mayor Henriette Reker told reporters.

In other words, he says it’s Germany’s responsibility to give these migrants classes that will teach them how NOT to rape.

If that’s true, then that – more than anything else – is proof that many of these people do not share Western values.

Is it too late for the United States political leaders to learn from Europe’s hard-earned lessons?