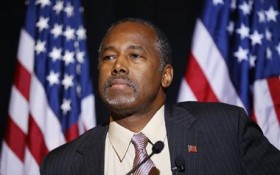 The race for the White House in 2016 has been building up for months. And voting finally begins in earnest tonight when residents in Iowa gather to caucus for their favorite candidate.

Dozens of presidential hopefuls have muddied the picture of the Republican field all winter, dividing voters and crowding debate stages. But after the Monday caucus carves out the pretenders from the contenders, Tuesday will likely see the GOP presidential prospects painted in a clearer picture.

Here are the five Republican nominees that The Horn News predicts will be finished after voting tonight.

Former Arkansas Gov. Mike Huckabee hasn’t just been struggling in the polls — he might not have enough cash for bus fare out of Iowa! According to the Wall Street Journal, Huckabee’s campaign only has $100,000 on hand. That’s not exactly the war chest he needs to stage what was already appearing to be an impossible comeback.

Former Pennsylvania Sen. Rick Santorum’s campaign is largely in the same boat, with only about $400,000 in the bank. And after a bad Iowa loss, Santorum’s poll numbers and ability to raise funds aren’t likely to improve.

Businesswoman Carly Fiorina has regularly impressed political analysts in debates. But her skill as a debater hasn’t translated to success in the field.

She’s polling at just 2% among Iowa voters according to polls, setting her up for a second-to-last finish in the Hawkeye State. And her New Hampshire polling numbers aren’t much better.

Though she has a sizable war chest in raised donations (some $4.4 million on hand), enthusiasm among conservative voters is sure to wane quickly.

Fiorina may be able to stick around for a while, but it’ll be nearly impossible for her campaign to recover from the incredibly bad showing experts predict for her in Iowa.

Voters may be shocked to learn that retired neurosurgeon Dr. Ben Carson raised more money than any of his rival Republican candidates in the fourth quarter of 2015. But he’s also spending a lot of money and has very little to show for it.

Having blown all of the $22 million his campaign raised in the last three months of 2015 — and already dipping heavily into his reserves — Carson has seen little progress in the polls.

Carson is currently projected to finish fourth in Iowa. Considering his presidential campaign has put just about all of it’s combined effort into winning in Iowa, a fourth place finish Monday night would be disastrous for Carson’s White House prospects. And he’s polling even worse in New Hampshire.

Before there was anti-establishment, there was the Paul family from Kentucky. But try as he might, Sen. Rand Paul has been unsuccessful in his attempts to tap into the anti-establishment wave that’s swept through the voting public and catapulted nontraditional candidates like billionaire Donald Trump and Texas Sen. Ted Cruz to the forefront.

From his high-water mark of 8% in February of last year, Paul is now polling at a dismal 4% among Iowa voters. And his donations to end 2015 reflect this waning enthusiasm.

Paul raised just $2.1 million in the last three months of 2015, putting him ninth out of eleven top GOP candidates. With just $1.3 million left on hand, Paul’s hopes for a 2016 resurgence are as dead as can be.