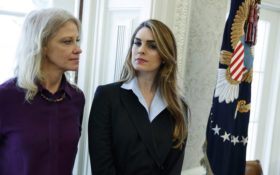 Conway, in a weekend interview on CNN, said she had no reason not to believe accounts by Holderness and another ex-wife that Porter had abused them. But when asked if she was concerned for top White House aide Hope Hicks, who reportedly was dating Porter, Conway said no because “I’ve rarely met somebody so strong with such excellent instincts and loyalty and smarts.”

In an op-ed in the Washington Post, Holderness wrote that Conway’s statement “implies that those who have been in abusive relationships are not strong. I beg to differ.”

“Recognizing and surviving in an abusive relationship take strength,” Holderness wrote. “The abuse can be terrifying, life-threatening and almost constant. Or it can ebb and flow, with no violence for long periods. It’s often the subtler forms of abuse that inflict serious, persistent damage while making it hard for the victim to see the situation clearly.”

Porter resigned from his post at the White House last week after Holderness and Porter’s second ex-wife, Jennifer Willoughby, came forward with allegations of emotional and physical abuse. Porter has denied harming any of his former partners.

Last week Willoughby said in a television interview that she was worried that Porter would soon begin abusing Hicks.

“If he hasn’t already been abusive with Hope, he will,” she said, “particularly now that he’s under a lot of stress and scrutiny. That’s when the behaviors come out.”

Amid the swirl of allegations against Porter, a second White House employee resigned last week after domestic violence accusations from a former partner. Speechwriter David Sorensen left the White House on Friday after his ex-wife, Jessica Corbett, detailed physical abuse that included being thrown into a wall and burned by a cigarette.