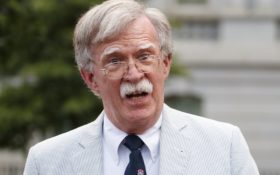 The hawkish Bolton departed in September because of numerous foreign policy disagreements with President Donald Trump. He reached a deal over the past few weeks with Simon & Schuster, according to three publishing officials with knowledge of negotiations. The officials were not authorized to discuss the deal publicly and spoke on condition of anonymity.

Two of the officials said the deal was worth about $2 million. Bolton was represented by the Javelin literary agency, whose clients include former FBI Director James Comey and the anonymous Trump administration official whose book, “A Warning,” comes out Nov. 19.

The publishing officials did not know the title or release date. Simon & Schuster declined comment Saturday and Javelin did not immediately respond to a request for comment. Bolton’s 2007 book, “Surrender is Not an Option: Defending America at the United Nations and Abroad,” was published by the conservative Simon & Schuster imprint Threshold Editions.

Bolton’s name has come up often recently during the House impeachment inquiry , which has focused on Trump’s pressure on Ukraine to investigate potential 2020 election rival Joe Biden, the former vice president.

In a transcript of a closed-door interview released Friday, a former national security official described how Bolton had “immediately stiffened” as Ambassador Gordon Sondland “blurted out” that he had worked out a trade — Ukrainians’ probe for an Oval Office welcome for Ukraine’s new president — with Trump’s acting chief of staff, Mick Mulvaney.

Fiona Hill said Bolton later told her that “I am not part of whatever drug deal Sondland and Mulvaney are cooking up” and asked her to relay that message to a White House lawyer.

Meanwhile, a letter from Bolton’s attorney to the top lawyer for the House alleges that Bolton was “part of many relevant meetings and conversations” pertaining to the House impeachment inquiry of Trump that are not yet public.

The attorney, Charles Cooper, suggests Bolton will appear before Congress only if a judge orders him to do so.

Appointed in April 2018, Bolton was Trump’s third national security adviser and is known for advocating military action abroad, a viewpoint Trump has resisted. In a speech in late September to the Center for Strategic and International Studies, given after he left the administration, Bolton offered a far more aggressive approach to North Korea’s nuclear program than the one advocated by Trump, who has spoken warmly about North Korean leader Kim Jong Un.

“Every day that goes by makes North Korea a more dangerous country,” Bolton said. “You don’t like their behavior today, what do you think it will be when they have nuclear weapons that can be delivered to American cities?”