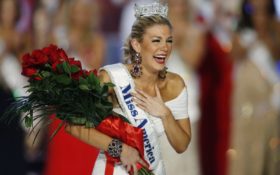 Some former Miss Americas who were attacked in emails from the pageant’s CEO are calling on him and other organization leaders to resign.

Three former title holders who were targeted for abuse in emails to and from Miss America Organization CEO Sam Haskell say the group’s leadership needs to be replaced.

Mallory Hagan’s appearance and sex life were mocked in the emails.

The Huffington Post reported Thursday on the emails, which it says it received from two sources.

“My hope is that this story that broke will bring light to the type of behavior that’s been in leadership of the Miss America Organization and really help us put in place some people who care and who embody the mission of Miss America,” Hagan said. “Having somebody bully you, demean you, degrade you in any way is not OK.”

In other emails, a former writer for the pageant notes the death of one former Miss America, and muses that he wished it had been 1998 Miss America Kate Shindle that had died instead. Shindle wrote a book critical of the Miss America Organization. Haskell responded to the email, indicating it made him laugh.

“The entire board of directors must immediately resign, including and especially Sam Haskell,” Shindle wrote on Twitter , adding the content of the emails “makes me physically ill.”

And Haskell wrote of tactics that would drive 1989 Miss America Carlson “insane.” The Huffington Post reported she had clashed with Haskell and pageant officials over her push to modernize the organization, and her refusal to attack other former Miss America winners.

Carlson wrote on Twitter that any board member or official who tolerated such conduct should resign immediately.

“No woman should be demeaned with such vulgar slurs,” she wrote.

The Miss America Organization said Thursday night that Haskell has apologized, and that the group is revising its policies regarding communications, adding it considers the matter closed.

Haskell and Miss America Organization officials did not respond to requests for comment Friday.

On Friday, Atlantic City’s incoming Democratic mayor, Frank Gilliam Jr., and two state Assemblymen — Republican Chris Brown and Democrat Vince Mazzeo — called on the state Casino Reinvestment Development Authority to end its partial subsidy of the pageant, which has about $4 million left on it.

The emails have cost the pageant its television production partner and raised questions about the future of the nationally televised broadcast from Atlantic City’s Boardwalk Hall the week after Labor Day each year. Dick Clark Productions told The Associated Press Thursday night that it cut ties with the Miss America Organization over the emails, calling them “appalling.”

The Huffington Post article shows that Haskell and others directed considerable attention to Hagan, who won the 2013 competition. He forwarded an email he had been sent regarding Hagan to a writer for the pageant, who has since been terminated.

The writer responded by questioning whether he and Haskell were part of a tiny group of people who had not had sex with Hagan.

“It appears we are the only ones!” Haskell replied, according to the Huffington Post.

Haskell also responded to an email from the writer that used a vulgar term for female genitalia to refer to former Miss Americas by indicating he found it amusing.