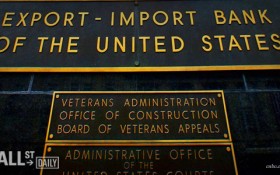 Congressional Republicans take yet another opportunity to insult the intelligence of GOP voters by re-authorizing an international lending scheme that in practice serves as Boeing’s piggy bank.

By 1934, even creditworthy countries found it nearly impossible to finance exports.

In stepped the United States government, under the leadership of President Franklin Delano Roosevelt, to fill the void.

FDR’s New Dealers created the Export-Import Bank of the United States to provide the international capital markets with liquidity.

Mun’s 1664 masterpiece, “England’s Treasure by Forraign Trade,” advocated subsidizing exports and deterring imports so the country could amass a huge store of “treasure,” which would finance wars against the French, the Dutch, or whoever else was Enemy of the Week.

The bank ceased to have a valid purpose around 1950, by which time any country with worthy credit to cover exports had access to international financing markets in New York or London.

Yet the Ex-Im Bank remained open for business, providing financing for longer maturities and on cheaper terms than were available elsewhere.

Fast forward to today’s era of ultra-liquid banking markets, and we see the Ex-Im Bank operating as an instrument of crony capitalism that subsidizes large corporations such as Boeing (BA).

Just four months ago, Congress could’ve killed the bank by simply doing nothing. In fact, closing the Ex-Im Bank was a major target of the Republican Congress elected last November.

Democrats opposed the closure largely on principle. That is, if you can close down bits of government that have far outlived their usefulness, where will it end?

So Ex-Im lives on, revived by a “discharge petition” in Congress that has forced a vote the bank will probably win.

The entire process is an excellent example of why the public disapproves of Congress by a margin of no less than 67% (16% approve, while 83% disapprove).

The Matter, Form, and Power of a Corrupt Government

Congress is rightly concerned about the federal budget deficit.

We’re talking not just the reported deficit ($439 billion as of September 2015) and the extent to which it’s likely to soar in the next downturn but also the off-balance sheet obligations that are likely to become critical in the event of economic uncertainty.

The largest of these are the costs incurred under the Medicare, Medicaid, Social Security, and disability programs, which are likely to soar in the coming decades given the country’s shifting demographics.

Granted, the Ex-Im Bank is hardly the most dangerous program. But it was one of the easiest to do away with. Indeed, its abolition was automatic if not extended.

Thus, with the deficit having soared since 2007 and waste appearing everywhere in government activities (don’t get me started on the subject of ethanol subsidies!), the Ex-Im Bank ought to have been an easy target for a Congress elected on fiscal responsibility.

The discharge petition doesn’t automatically revive Ex-Im Bank; Congress still has to vote on it. No doubt “reforms” will be imposed as a fig-leaf for perpetuating this waste of resources and distortion of the economy.

Maybe the Ex-Im Bank and its supporters will participate in the witless theatre whereby Congress proposes a funding bill the President doesn’t like and the President, backed by a friendly media, threatens to close down the government or cause the country to default if his priorities aren’t followed.

In the final analysis, Congress will have achieved nothing by November 2016 in its efforts to rein in Leviathan.

Its ratings will drop another point or two. Congressmen will run for re-election, wondering, still, why people don’t like them.

Thus the current state of this union.