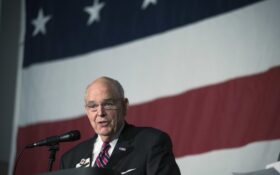 A big political donor, his consultant, and a former North Carolina congressman are receiving punishments for their roles in trying to bribe the state’s top insurance regulator.

Federal prosecutors want Lindberg to get 14 years in prison and Gray 10 years. Jurors convicted them in March of conspiracy to commit wire fraud and bribery. Their lawyers are seeking a small fraction of that time. Gray, who had worked as a consultant for Lindberg, wants to serve any time at home because of health problems.

A wealthy insurance and investment firm founder, Lindberg had been among the state’s top political donors. He had given more than $5 million to state and federal candidates and committees since 2016, favoring Republicans but also giving to Democrats.

In 1944, an experiment was done in this Nazi medical center…  [Sponsored]