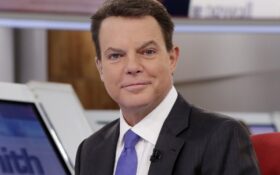 Two weeks shy of a year after abruptly quitting Fox News Channel with a declaration that “truth will always matter,” Shepard Smith returns to television this week at his unexpected new home.

He begins a general interest nightly newscast Wednesday at 7 p.m. on the financial network CNBC, putting him back in the time slot he loved before Fox moved him to the afternoon seven years ago.

The 56-year-old newsman, a Fox News original who joined that network at its start in 1996, says he’s relishing the fresh start.

He’ll work out of a new studio that’s been built for him at CNBC’s New Jersey headquarters by three crews that kept construction going 24 hours a day over eight weeks.

Smith left more questions than answers upon his Fox exit, leaving others to speculate about why. His 3 p.m. newscast stood out at a network where opinion is king, and sometimes he challenged statements made by the network’s prime-time hosts.

Figuratively speaking, he didn’t smash windows on the way out and still doesn’t.

“I built a career at Fox News and I have some deep friendships, ones that I’m going to keep forever,” he said. “But simply, I just felt it was the right time to leave. I asked them if I could and they eventually allowed me to do that.”

At Fox, “their business model is working very well for them,” he said. “Their opinion people state their opinions and they draw big audiences. I have no problem with that.”

Smith’s 2013 removal from the evening schedule, where the biggest cable news audiences reside, was an early sign that the balance was tipping toward more opinion — and not just at Fox. It was announced that he would be on call to anchor in prime-time during big stories, but there proved little interest in pre-empting the stars.

His 3 p.m. newscast was influential, even if unpopular with many core Fox viewers, and the network’s willingness to pay its personalities well no doubt eased hurt feelings.

He left Fox two weeks after an ugly incident with Tucker Carlson, who brought on a guest who said Fox’s Andrew Napolitano was a “fool” for analysis offered on Smith’s show. Smith said on the air that Carlson’s attack was repugnant.

Asked about it, Smith said that “I had felt like it was time for a new challenge for a long time. Nothing about any talent, any on-air people at that place, pushed me out the door.”

Smith, a Mississippi native, said he enjoyed some down time, with a couple of vacations. He also took meetings with plenty of media suitors.

“He’s smart as a whip, agile, super curious and an amazing broadcaster,” said news consultant Michael Clemente, Smith’s former boss at Fox News and a longtime ABC News executive. “He’s in the same league as Peter Jennings. He’s probably got better chops than just about everyone who is out there, and he’s not a product of New York. He’s not from Los Angeles. He’s from the core of the country.”

Every few years when Smith approached the end of a contract, CNBC Chairman Mark Hoffman would check in with Smith’s agent, Larry Kramer. In a nearly empty Manhattan restaurant just before the COVID shutdown, the three men met.

With CNN, MSNBC and the broadcast networks courting Smith, CNBC was considered an underdog, at best.

“My feeling was that it was not an obvious, conventional move for him,” Hoffman said. “But at the same time I felt we had a concept we had been thinking about for a number of years that just might fit his interests. It just so happened that it was, item for item, exactly what Shep was looking for.”

CNBC offers financial news during the day and general interest programs that appeal to an affluent audience at night, things like “Shark Tank,” “Jay Leno’s Garage” and “Secret Lives of the Super Rich.” The network needed something to serve as a bridge between the day and night identities, and thought a smart, straight newscast could do the trick, he said.

“We really clicked at that first meeting,” Hoffman said. “It was one of those easy conversations. It wasn’t a sales pitch. We didn’t talk about what we wanted him to do. I just talked about what we wanted to do. We had a nice chemistry and our interests seemed to be aligned. I would say he left the meeting intrigued and then it moved from there.”

That was their last face-to-face meeting. Negotiations were done via Zoom.

Smith said he heard great ideas from other networks. “It’s just that this one fit better,” he said.

Being part of the larger NBC News family would hold potential future options for Smith, as well as providing journalists whose work could be included in his new CNBC show.

Otherwise, CNBC offers the closest thing to a clean slate you can find in television news. Fox News Channel is averaging 2.7 million viewers in the 7 p.m. time slot this year. MSNBC has 1.7 million and CNN has 1.5 million, the Nielsen company said.

There’s really no other place to go but up.

“It’s not an easy thing to start from scratch,” Smith said. “There’s no muscle memory at CNBC in terms of doing a general newscast. We’re creating all of that. And that’s fun. It was fun creating in 1996, and it’s fun creating in 2020.”