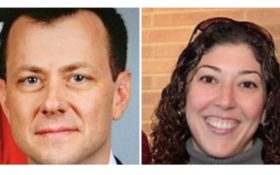 An attorney for former FBI lawyer Lisa Page says she will not appear for a private interview Wednesday with two House committees, despite having been subpoenaed.

According to Page’s lawyer, she didn’t have enough time to prepare and had demanded the House Judiciary and Oversight and Government Reform Committees to schedule another date.

House Judiciary Chairman Bob Goodlatte, who issued the subpoena, said that Page has known for months that she would be interviewed — and there was “no excuse for her failure to appear.”

The committees are interested in Page as part of their investigation into anti-Trump bias at the Justice Department.

House Judiciary Chairman Robert Goodlatte said Page has known for months that the panel has sought her testimony, and the committee will use “all tools at our disposal” to obtain it. If a witness does not respond to a subpoena, the full House can vote to hold her in contempt of Congress.

Page’s lawyer claims that because the Committees would not schedule her private interview for another time, “Lisa is not going to appear for an interview at this time,” Amy Jeffress said in a statement Tuesday evening.

But, Goodlatte believes there may be another reason Page is defying her subpoena.

“It appears that Lisa Page has something to hide,” Goodlatte said.

Trump tweeted on Tuesday,”I am on Air Force One flying to NATO and hear reports that the FBI lovers, Peter Strzok and Lisa Page are getting cold feet on testifying about the Rigged Witch Hunt headed by 13 Angry Democrats and people that worked for Obama for 8 years. Total disgrace!”

I am on Air Force One flying to NATO and hear reports that the FBI lovers, Peter Strzok and Lisa Page are getting cold feet on testifying about the Rigged Witch Hunt headed by 13 Angry Democrats and people that worked for Obama for 8 years. Total disgrace!

House Republicans have suggested the FBI was conspiring against Trump during and after his presidential campaign, and the two committees are investigating decisions made by the agency and the Justice Department during the 2016 presidential election.

The Judiciary committee issued a subpoena Saturday for Page to appear Wednesday, according to Jeffress. She suggested on Monday that it was still unclear whether Page would appear, saying in a statement that they were “still waiting to work out a reasonable date” for the interview and waiting on documents from the FBI to prepare. On Tuesday, Jeffress said she and Page had gone to the FBI to review the materials, “but after waiting for more than three hours, we were not provided with any documents.”

The Judiciary and Oversight panels have already spent much of the summer holding hearings and interviews critical of the FBI and Justice Department. Democrats have strongly objected to the GOP-led investigation, saying it is an attempt to undermine Mueller’s probe and sway public opinion against investigators.

The committees have focused much of their ire on Strzok, who was interviewed privately by lawmakers on the two committees for 11 hours June 27. He will return to Capitol Hill for the hearing Thursday, the first time he will speak publicly about the messages.

Strzok had a leading role in the Clinton probe and was removed from the Mueller investigation after the texts were discovered a year ago. Page had already left the Mueller team.

A report by the Justice Department’s internal watchdog released last month detailed the inflammatory texts between the two, including an exchange in which Strzok wrote “we’ll stop it” in reference to a potential Trump election win.