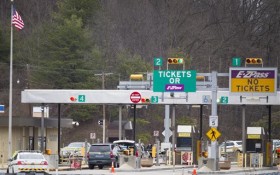 A retired state trooper killed a turnpike toll collector and a security guard in a holdup attempt at a toll plaza and then was shot dead by troopers while trying to escape with the money, authorities said.

Clarence Briggs, who retired four years ago, confronted two Pennsylvania Turnpike toll collectors with a handgun on Sunday morning at the Fort Littleton toll plaza in Dublin Township, 65 miles west of Harrisburg, the state capital, police said. Briggs ordered both into an adjoining office and tried to tie them up but fled after a struggle, they said. Both employees left the building as a fare collection vehicle arrived and a security guard emerged, they said.

Briggs then shot and killed one of the toll collectors, Danny Crouse, who had been on the job for less than three months, and Ronald Heist, a retired York police officer who was employed by a detective agency and was working as turnpike security, Capt. David Cain said.

Troopers arrived within minutes, and the first trooper exchanged shots with Briggs, who was wounded and died at the scene, police said.

Briggs, who was from Newville, retired in January 2012 from the Newville station of Troop T in Cumberland County, which is part of the turnpike system. Cain, the commander of Troop T, said it was possible Briggs had been waiting for the collection vehicle, but he declined to comment on whether an investigation was focusing on the retired trooper’s familiarity with turnpike operations and collection procedures.

Turnpike chairman Sean Logan vowed at a news conference at a turnpike maintenance facility in Shade Gap that officials would “expend whatever resources necessary and make sure we find out exactly what transpired this morning and to make absolutely certain that our system is secure and that our employees are protected.”

Logan said such an event had happened only “a handful of times” in the 75-year history of the turnpike, which extends 360 miles across the state.

“Our system is very secure, very safe,” he said. “We just want to make sure if there’s more we can do that we will do it.”

He described the Fort Littleton stop as “one of our lowest-volume” interchanges, and officials said there was no indication why it was targeted.

The other turnpike toll collector, who was uninjured, was home resting and recovering but planned to return to work in a day or two.

Briggs, officials said, retired after 26 years with an honorable discharge, and there was no indication of the reason for his actions.