Everything you need to know about Trump-Putin summit... - The Horn News 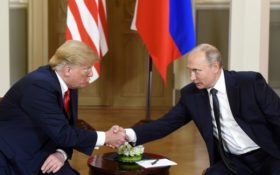 President Donald Trump opened a summit with Russian dictator Vladimir Putin on Monday by predicting that their countries will end up having “an extraordinary relationship.”

“Our two countries, frankly, we have not been getting along well,” Trump said as he and Putin sat down at the Presidential Palace in Finland’s capital. “I really think the world wants to see us get along.”

Putin, for his part, said he and Trump have maintained regular contact, including talking by phone and meeting at international events. Speaking through a translator, the Russian leader said “the time has come to have a thorough discussion on various international problems and sensitive issues.”

Our relationship with Russia has NEVER been worse thanks to many years of U.S. foolishness and stupidity and now, the Rigged Witch Hunt!

“Our relationship with Russia has NEVER been worse,” Trump tweeted Monday morning, blaming “many years of U.S. foolishness and stupidity and now, the Rigged Witch Hunt!”

The summit started late because Putin arrived in Helsinki about a half hour behind schedule in another display of the Russian’s leader famous lack of punctuality. Putin has been late for past meetings with the Pope and British Queen, among many others.

Trump and his aides have repeatedly tried to lower expectations about what the summit will achieve. He told CBS News that he didn’t “expect anything” from Putin, while his national security adviser said the U.S. wasn’t looking for any “concrete deliverables.” Trump told reporters during a breakfast Monday with Finland’s president that he thought the summit would go “fine.”

Trump said he and Putin would discuss a range of issues, from trade to the military, along with missiles and China. They shared a brief handshake before reporters were ushered out so they could begin their one-on-one talks in the palace’s opulent Gothic Hall.

They’ll continue their discussions with an expanded group of aides and over lunch in the Hall of Mirrors, once the emperor’s throne room. The leaders will conclude by taking questions at a joint news conference.