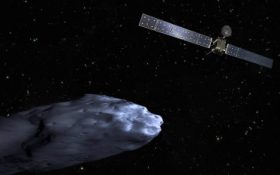 The European Space Agency’s Rosetta space probe has captured images of a bright burst of light on the comet it is orbiting, apparently caused by a landslide.

The dramatic light flashes were recorded Feb. 19 and accompanied by rising temperatures and sharp increases in dust, gas and plasma released from comet 67P/Churyumov-Gerasimenko.

Eberhard Gruen of the Max-Planck-Institute for Nuclear Physics in Heidelberg, Germany, said Thursday a landslide on the comet’s surface was most likely responsible.

The flashes would have been generated by light reflecting from dust particles kicked up by the landslide.

The European Space Agency plans to crash-land Rosetta on the comet’s surface Sept. 30, more than two years after it started orbiting the comet.

Data collected by Rosetta and its lander, Philae, have improved scientists’ understanding of comets.