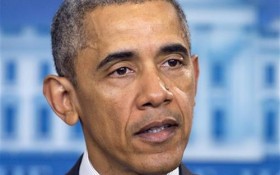 President Barack Obama hailed his recent dealings with Iran as “a success of diplomacy that hopefully we’ll be able to copy in the future.”

It appears leaders of the European Union strongly disagree.

The EU on Monday said it has extended sanctions against 82 Iranian officials until 2017 because of the human rights situation in the nation.

The 28-nation bloc has had asset freezes and travel bans in place against Iranians since 2011 because of perceived violations of human rights.

The measures came despite a recent improvement of relations linked to a nuclear deal between Western powers and Tehran, and leaves the Obama administration in a bind.

This isn’t the first political blow back on the administration’s dealings with Iran, either. As it seeks to implement, preserve and strengthen the landmark nuclear deal it negotiated with Iran, the administration is being buffeted by criticism from all sides: Iran, Europe, Asia, the Middle East, not to mention members of Congress, including some who supported the agreement.

Under the nuclear deal that took effect in January, Iran curtailed its nuclear program in exchange for billions of dollars in sanctions relief.

But Iran says the economic boon isn’t enough because of remaining U.S. economic penalties for its other behavior, and some officials have threatened to walk away from the deal.

Adding to their unease is the 2016 U.S. presidential election, in which the top Republican prospects have pledged to rip up the nuclear deal.

At the same time, Israel, its supporters and Arab nations are crying foul over Iran’s continued testing of ballistic missiles as well as its ongoing support for Lebanon’s Hezbollah movement, Syrian President Bashar Assad’s government and Yemen’s Houthi rebels.

They say Iran is as dangerous as ever. Many members of Congress agree and are demanding new sanctions.

While the administration says it remains vehemently opposed to Iran’s missile tests and destabilizing activities throughout the Middle East, it insists the nuclear deal has made Iran less of a threat. The cost of walking away from the deal, U.S. officials maintain, will be even more destabilization and a graver threat.

Thus, the U.S. has been thrust into a role of defending Iran on its nuclear deal compliance and condemning its other actions as it simultaneously promotes business with Iran in the context of the new leeway afforded by sanctions relief.

The administration has sent State Department and Treasury officials to try to explain the regulations, but questions remain. Some European leaders, notably French President Francois Hollande, have personally raised the matter with Obama, diplomats say.

U.S. lawmakers, many of whom opposed the nuclear deal on principle, have moved to prevent what they say is an administration overreach: a proposal to ease rules relating to the use of the dollar in third-party foreign currency exchanges in support of deals with Iran. Administration officials say such an easing is unnecessary because those transactions are allowed. Still, the suggestion of a change has Capitol Hill on edge.

Despite the uncertainty, the administration has refused so far to say what, if anything, it will do to clear the air.