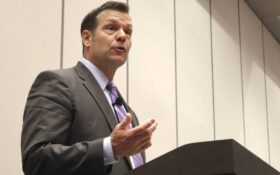 Republicans haven’t lost a Senate contest in Kansas since 1932. But party leaders in Washington and many GOP activists in Kansas fear that the normally safe seat held by retiring four-term Republican Sen. Pat Roberts will be in play if the party nominates Kobach, the former Kansas secretary of state who is nationally known for advocating restrictive immigration policies.

Trump didn’t intervene to help Rep. Roger Marshall in a crowded field, despite prodding from Senate Majority Leader Mitch McConnell and others. The two-term congressman for western and central Kansas faced blistering attacks in the final weeks of the campaign, including from a political action committee with Democratic ties.

The GOP already faces a potentially tough year in trying to retain its 53-47 Senate majority with competitive races in other states, including Arizona, Colorado, and Maine. Establishment Republicans are hoping to avoid a repeat of 2018 when Kobach lost the state’s gubernatorial race to Democrat Laura Kelly after alienating independent and moderate GOP voters.

The state saw a heavy reliance on mail-in ballots amid the coronavirus pandemic, and at least 234,000 voters cast ballots in advance — more than double the number from the 2018 and 2016 primaries. Counties could accept ballots until Friday so long as they were postmarked Tuesday, creating uncertainty that the GOP Senate primary would be decided before then.

Many Republicans were nervous about the Senate race because the presumed Democratic nominee, state Sen. Barbara Bollier, has raised more than $8.2 million for her campaign, seeing a flood of contributions from outside Kansas. Bollier is a retired Kansas City-area anesthesiologist and former moderate Republican who switched parties in 2018.

Marshall raised about $2.9 million and Kobach, a little more than $1 million. Bob Hamilton, the founder of a Kansas City-area plumbing company largely self-funded a campaign heavy on television ads with $3.5 million in personal loans. Those figures were all dwarfed by PAC spending in the primary, which totaled about $11 million.

Marshall, Kobach, and Hamilton sat atop an 11-person field, the largest one for the GOP since the state began holding Senate primaries more than 100 years ago. Kansas has no runoff elections, so if Kobach maintains his solid base on the right, he could emerge if the rest of the vote splinters.

Marshall and his allies made Kobach’s loss in the governor’s race a key issue and argued that he was the best alternative. McConnell’s first choice was U.S. Secretary of State Mike Pompeo, a former Wichita-area congressman, but while Pompeo made multiple visits to Kansas suggesting interest, he declared himself out in January.

Kobach argued that the issues he’s often emphasized — particularly immigration — would play better in a fall Senate campaign and said he’d benefit from a flood of pro-Trump voters going to the polls in November after skipping voting in the 2018 midterms. He also played up his status an informal adviser to Trump and the White House and the first prominent Kansas official to endorse Trump’s presidential bid in 2016.

Roberts declared his support for Marshall after the congressman had picked up endorsements from the U.S. Chamber of Commerce, the Kansas Farm Bureau, the National Right to Life Committee and Kansans for Life, the state’s most influential anti-abortion group. He also had the backing of 97-year-old political icon Bob Dole, the former U.S. Senate majority leader and 1996 GOP presidential nominee.