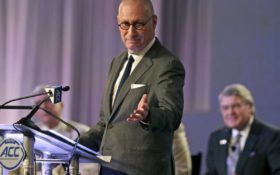 John Skipper, president of the sprawling ESPN sports network, said Monday that he is resigning to treat a substance abuse problem.

Skipper’s sudden announcement will force the Walt Disney Co.-owned network to search for new leadership at a time of retrenchment, with the company losing subscribers due to cord-cutters and working to boost its digital output to follow the migration of young sports fans to their smartphones.

The 61-year-old executive, who has worked at ESPN since 1997 and has led the company since 2012, said he’s struggled for many years with substance addiction but gave no details of his specific problem. He said he had concluded that now is the time to deal with it.

“I come to this public disclosure with embarrassment, trepidation and a feeling of having let others I care about down,” he said. “As I deal with this issue and what it means to me and my family, I ask for appropriate privacy and a little understanding.”

The sports network said Skipper’s predecessor, George Bodenheimer, has agreed to serve as acting head of the company for the next 90 days.

Disney Co. chief executive Robert Iger said he wishes Skipper well during a challenging time. “I respect his candor and support his decision to focus on his health and his family,” Iger said.

There was no public indication that this was coming. Earlier this year Skipper signed a contract extension to keep him at ESPN through 2021 and last week spoke about the company’s plans in New York at the Sports Video Group Summit. He told the group of industry experts that ESPN’s growing digital audience is making up for the loss of television viewers.

He also called hundreds of ESPN’s on-air talent to a summit last week at company headquarters in Bristol, Connecticut, to talk about the business.

ESPN is also not escaping the current focus on sexual misconduct. ESPN quickly canceled a show earlier this year produced in partnership with Barstool Sports after some questions were raised about content, and the Boston Globe reported last week about several current and former network employees describing a “locker room culture” at the network that is hostile to women.