[Alert] Escaped inmate back in custody - The Horn News 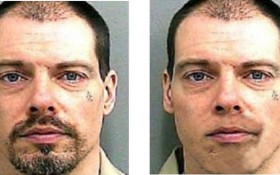 Authorities say an inmate who escaped last week from a minimum security prison in New Jersey is back in custody.

Lacey Township police said on Twitter that 38-year-old Arthur Buckel was located Monday in a wooded area near the Garden State Parkway.

A New Jersey police chief says an escaped inmate did not resist and appeared fatigued when he was captured.

He says a 20-year police veteran tracked 38-year-old Arthur Buckel down nearby and held him at gunpoint as a state corrections officer took him into custody.

State police say Buckel was seen late Sunday near a rest area, where Lacey police say state troopers and Buckel’s family had made arrangements for him to turn himself. But, he was gone when state police arrived.

Buckel was discovered missing last Tuesday when guards did a count in the Ancora unit of Bayside State Prison in Hammonton. He was just three weeks from becoming eligible for parole for aggravated assault.

Buckel previously served 14 years in prison after pleading guilty to aggravated manslaughter of a 10-month-old child.