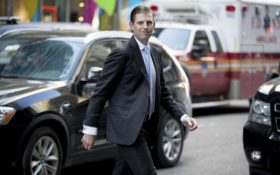 The mainstream media has covered every possible derogatory rumor about the Trump family for years. But there wasn’t a peep from CNN or the rest when Eric Trump rushed into traffic to save a woman’s life.

Last week, the morning started off very ordinary for Eric — until he noticed a woman pass out near a train station and immediately  jumped into action.

The president’s son rushed to the aid of the woman, dodging traffic while chasing down an ambulance in busy New York City and was credited with helping save the woman’s life.

According to eyewitness accounts, Eric and his Secret Service detail rushed to the aid of the unidentified woman outside of the F train stop near 57th Street and 6th Avenue last Wednesday morning.

As Eric was tending to the woman, he noticed an ambulance go by and raced to stop it.

“I watched as Eric looked up, spotted an ambulance slowly passing by on 6th, ran into traffic — almost getting hit by a bicyclist — and shouted at the ambulance to get its attention,” said the observer.

The observer added that it was not clear if Eric had called the ambulance, or just had really great ambulance hailing skills.

“Not sure if the ambulance had been called for or if Eric managed to hail one out of the blue, but in any case his sense of urgency was clear — and he succeeded in getting the paramedics to stop and tend to the woman,” added the observer.

To no one’s surprise, the selfless act of the president’s son went completely unnoticed by the mainstream media.

Although conservative news outlets such as The Political Insider and The Washington Examiner have reported on Eric’s Good Samaritan role, mainstream media giants CNN and MSNBC have stayed completely silent.

It seems that this story did not fit their liberal narrative.

To his credit, Eric did not ask for the recognition that he received for helping the ailing woman.

“I’m glad we were able to play a small role in getting help for the woman on 58th Street,” he told The Washington Examiner.

“We just happened to be in the right place at the right time. I’m especially grateful to the EMTs who took over. It was certainly my first time hailing an ambulance in New York City,” he added.